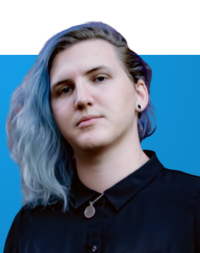 Growing up in an age rife with disinformation, I knew I wanted to work in a field that helped encourage the growth of a robust civil society. Now, working with ICFJ, I help facilitate programming that supports journalists working around the world to ensure the public is informed. As finance and logistics assistant, I am responsible for liaising between the program and finance departments, as well as assisting ICFJ partners, program participants, contractors and grant recipients.

My background: I began working in publication and content production after I noticed that much of the brilliant work in academia is generally inaccessible to the public.

Serving as the grant and program coordinator for George Mason University’s Middle East Studies department, I worked with a variety of scholars to coordinate research and media symposiums, develop curricula that seeks to correct Islamophobic discourse in the U.S. education system, and create multimedia platforms that make academic-level knowledge more accessible to the public. Beginning in 2017, I began as associate producer at the renowned e-zine Jadaliyya and its sister publication, Status/الوضع. From Paris, France, to Muscat, Oman, my interest in amplifying the work of journalists and scholars from countries underrepresented in mainstream English publications led me to join the ICFJ team in 2021.

I have a master’s in Middle East and Islamic studies, as well as a B.A. in global affairs from George Mason University. I have produced award-winning research focusing on critical legal theory’s application in the Palestine liberation movement as well as on the lives of Muslim socialists in Central Asia during the Soviet era.

Ask me about: Student and labor organizing, rock climbing and Islamic liberation theology