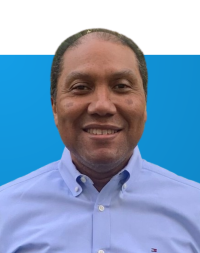 As a journalist in Latin America covering international and domestic affairs, my investigative work often led to government threats. After facing those challenges, I became a strong advocate for press freedom and high standards in journalism. The driving force behind my career at ICFJ is my mission to promote high-quality, in-depth reporting that holds governments accountable.

As deputy vice president of global impact and strategy, I oversee ICFJ’s monitoring, evaluation and learning (MEL) process and lead ICFJ’s efforts in ensuring programs’ impact. I share how our programs are effective on a global scale and communicate our high-quality outcomes to our staff, key stakeholders, funders and partners. Serving as senior advisor to ICFJ’s leadership team, I ensure that key project outcomes and project initiatives are evaluated and leveraged for maximum impact.

My background: I am an award-winning journalist with more than 25 years of experience in reporting critical issues and managing international media programs. I am also an international media analyst for major news networks such as CNN en Español, NTN 24, and Voice of America. During my reporting career, I covered assignments in Latin America, the U.S. and Europe, focusing on U.S. military operations, as well as political and labor issues. I also covered presidential summits in Latin America, elections and presidential visits to Washington, D.C. At ICFJ, I have served in various leadership positions, including senior program director of special projects and director for Latin American programs. In these roles, I designed and launched several of the most impactful ICFJ programs that engage media, civil society and government officials. I launched ICFJ’s flagship program, the International Journalists Network (IJNet), and expanded ICFJ’s presence in Latin America, helping make it the premier journalism organization in the region that develops groundbreaking programs on journalism ethics, press freedom, digital technology and investigative reporting in more than 20 countries.

I have a master’s degree in mass communications and a bachelor’s degree in journalism from Louisiana State University, where I received the Manship School Fellowship. I am also a recipient of  a prestigious Fulbright scholarship and was recognized as one of the top young professionals of Panama by the Junior Chamber of Commerce for academic achievements.