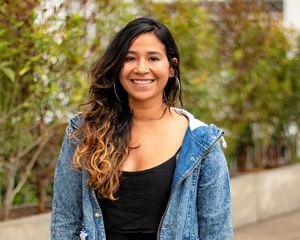 Angelica Cuevas is a 2019 Professional Fellow from Latin America with ICFJ.

Angélica Cuevas was born in Medellín (Colombia) in 1988. She graduated from the school of Social Communication and Journalism from the Pontifical Bolivian University. She has over eight years of experience covering environmental, scientific, public health, and education issues. In 2014, she received Amway's National Environmental Journalism Award for covering a story on an environmental emergency in the region of Casanare.  She has collaborated with Vice News - Colombia, the travel blog Comviajeros.com, and the Savia Botanica Project, a collection of books focused on the dissemination of Colombia's botanic biodiversity. She’s interested in photography, design, the innovation of multimedia journalistic content.
Since 2017, she has led the Communications office of Dejusticia, a Colombian non-profit organization. Currently,  her team is working on an innovation project that is trying to bring narrative-journalist tools to the Human Rights movement. The project launched, in December 2018, Amphibian Tales. This is the first Colombian podcast led by an NGO to narrate stories related to the defense of human rights in the Global South.