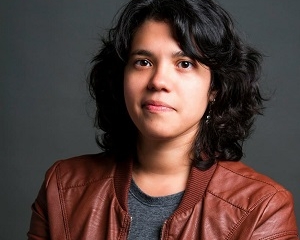 Audrey Cordova Rampant is a 2018 Professional Fellow from Latin America with ICFJ.

Audrey Cordova Rampant was born in France in 1989, in the Champagne region. She is a Franco-Peruvian journalist, photojournalist, filmmaker and digital story producer. When she grew up, she gained awareness about migration because part of her family is from Peru, but she also learned of racism and discrimination suffered by Latin American migrants in Europe. At 19, she decided to move from France to Spain to study journalism at Carlos III University of Madrid, to understand and tell about the migration between Spain and Latin America. She worked for French and Spanish media outlets and specialized in migration, human rights and social issues. In 2014, she moved to Peru to know the country of her father, where she specialized in environmental stories and produced “Behind the Dirty Gold” (Las rutas del oro), the first investigative transmedia project and web documentary about illegal mining of gold in five Amazonian countries. Her project received “Best Camera Reporter Award” from the Institute of Press and Society (IPYS). While she was working for the independent nonprofit news organization OjoPúblico, she was part of the team that led the project “The Highway Tearing Through the Heart of the Amazon” (Roberto Eisenmann Jr. Award in Environmental Journalism, 2017, by the Inter American Press Association);  “The Stolen Memory Project: The Hidden Stories of the Cultural Looting of Latin America” (receiving third prize at COLPIN, 2016.) She co-founded StoryCode Peru, the first Peruvian community about digital storytelling, transmedia projects, and training for professionals and students through conferences and networking. She now works at RPPData, the first investigative area of broadcasting company RPP Noticias. This year she started to teach digital storytelling and transmedia journalism at Centro de la Imagen de Lima.