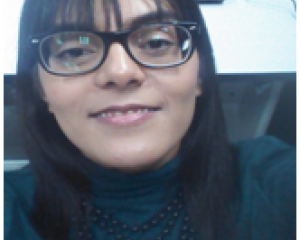 Ramos is a journalist from Guadalajara, Mexico. She currently works as a reporter at the largest metropolitan newspaper in the city, El Informador, where she covers a wide range of news on arts, entertainment, politics, communication and economics.

Ramos is also a professor at the Universidad de Guadalajara, where she graduated in journalism in 2010. While still in college, she became an editor and reporter in the official magazine of the universityâ€™s journalism department, and later she became a contributor for a digital music magazine called ProyectoMx.

In 2009, she entered El Informador as an intern, and later became a copy editor on the local news desk. Two years later, she was offered a position as the assignment editorâ€™s assistant and was in charge of coordinating news production tasks working side by side with reporters, photographers and contributors from all areas.

Ramos has also worked on freelance jobs as a writer and copy editor. Her current interests involve exploring challenges of the millennial generation, social identities, Internet pop culture and the economy.