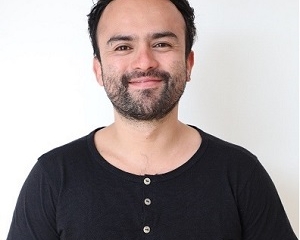 Diego Fernando is a 2018 Professional Fellow from Latin America with ICFJ.

Diego is a social communicator and journalist who was born in Bogota in 1984. He graduated from journalism school and received a diploma in strategic management of communication, information and technology from Universidad de la Sabana. After graduation, in 2010, Diego started working for Caracol Radio, the first Colombian radio, where he was a producer for the radio show “Hoy x Hoy” with Gustavo Gómez, where he oversaw scriptwriting for the show, researching guests (national and international) with focus on the most important news in Colombia and the world. He also oversaw the investigation and development of cases related to abuse, crimes or denouncements reported by the audience of the show. In that year, he also started working in another radio program called “A Vivir Que Son 2 Días.” Diego was the co-creator of the segment “Tejiendo la Red,” the first technology space of Caracol Radio on the air. He was the segment’s host, content editor and in charge of information and guests. In 2014, he started working at “Canal Trece” as a television host/producer of the show “El Crew.” He began as co-creator and host of the segments “En Línea” and “Moviecrew,” focusing on discussing the latest news related to technology, culture and entertainment. In 2015, he co-hosted the “Late Show.” In 2016, Diego created “Las 3 de Caracol Radio” a digital segment focused on a social media audience. A year later, he hosted the television show “Directo Cultura,” a space that was dedicated to the cultural industry of Bogota and other Colombian departments. Right now, he is the producer of the show “La Luciérnaga,” a radio segment at Caracol Radio that analyzes the political news of Colombia, while comedians parody the most influential personalities in the country.