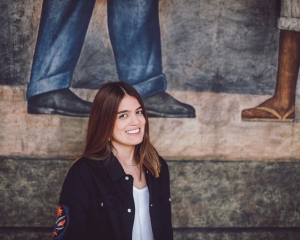 I'm Gisella Rojas. I'm 27 years old and I'm a Latin American journalist. I graduated from Casa Grande University in Ecuador as a journalist with a minor in Political Science. Afterward, I was granted a scholarship to study investigative journalism in Mexico. During that time I won the Mobile Journalism Competition Award from the Thomson Foundation, which took me to Ireland and later on to London where I received training in multimedia and mobile journalism. On the final week of the Thomson Foundation summer course, every student has a week of work placement within a UK organization. In my case, I went to the newspaper The Guardian, where I had the chance to explore how they work in departments like multimedia, social development, international affairs, and others. At the end of 2018, I received half of a scholarship to do a master's degree in investigation and data journalism in Spain, where I had the opportunity to work at El Mundo and Expansion, both Spanish newspapers.