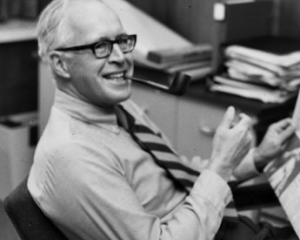 James D. Ewing was a co-owner of The Keene Sentinel for nearly four decades and a force in the fields of government reform, social service and international journalism training.

Under Ewing's leadership, which extended into the early 1990s, The Sentinel expanded its geographic reach to become a regional newspaper for southwestern New Hampshire, and the paper made the transition from industrial- age machinery to modern printing and computer technology.

During his tenure as publisher, the newspaper successfully campaigned for a wide range of local and state-level causes including, among others, land-use planning, freedom of information and public services for the needy.

To carry out those missions and to otherwise inform The Sentinel's readership, Ewing consistently maintained a newsroom far larger than industry standards -- a reflection of the fact that he regarded newspapering very much as a public service.

His belief in the ability of aggressive newspapers to help readers make wise decisions about government and society extended beyond Keene. After leaving day-to-day newspapering to his employees in the mid-1980s, he helped launch the International Center for Journalists (ICFJ), a Washington-based training institute for journalists around the world.

Some participants in those programs wound up visiting Keene and The Sentinel for periods ranging from a few days to a month. The visits combined professional concerns with social and cultural exchanges. One of the trainees who visited was Hamid Karzai, previously a member of the Afghan National Liberation Front and now the President of Afghanistan, who was trained by Ewing and ICFJ in 1987.