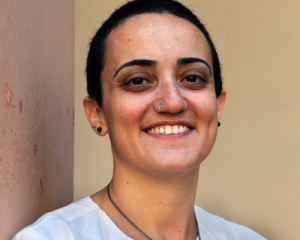 Lina Attalah is co-founder and chief editor of Mada Masr, an online news organization at the forefront of investigative journalism in Egypt. She leads a team of fearless reporters who expose high-level corruption and misconduct in the midst of the country’s harsh crackdown on independent voices.

Attalah is the recipient of the 2020 Knight International Journalism Award presented by the International Center for Journalists to honor outstanding journalism that has an impact.

She has been the driving force behind Mada Masr since it launched in 2013. In 2017, she was recognized as a “New Generation Leader” by Time magazine, which called her the “Muckraker of the Arab World.”

Under her leadership, Mada Masr has remained one of the few sources of independent news as many Egyptian news organizations have succumbed to government harassment and controls.

The news site has shed light on critical topics ranging from government management of prisons to the role of the security apparatus in shaping Egypt’s parliament to the plight of Sudanese refugees in the country amid COVID-19.

In response to their reports, Attalah and her journalists have been routinely harassed by security forces and operate under constant threat of arrest. Attalah’s most recent arrest came on May 18, when she was picked up outside Tora Prison in Cairo while interviewing the mother of a jailed activist who was on a hunger strike. Attalah was briefly detained then released.

Authorities have also blocked the Mada Masr site, but it continues to publish by repeatedly creating alternate sites and circulating stories on social media platforms.

Before establishing Mada Masr, Attalah was managing editor of the Egypt Independent, which was closed in 2013. A journalist for 16 years, she covered major stories in the news throughout the region, such as Egypt’s 2011 revolution, Syria’s revolution and war, and Iran’s 2013 presidential elections.