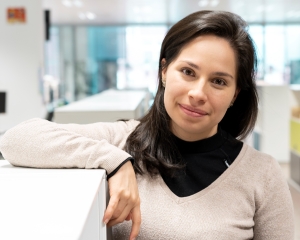 Lizeth Briceño is an Ecuadorian journalist. She mainly writes articles about topics related to social economy, migrations, gender, and health. She hopes to expand her journalism skillset to include writing for social networks and podcasts.
For a year, she worked at Trama Editions as a writer for magazines, books and blogs on topics such as architecture, tourism and local culture. Then, she co-created Clic Creativos - a content and communication agency - where she was the Content Coordinator. After Clic Creativos took off, she decided to continue with her dream of being a journalist.  Consequently, she became a community manager and media journalist at La Posta where she built the audience's target for each content. While she was working there, she was awarded a scholarship from Fundación Carolina to study journalism in Madrid, Spain for her master’s degree. During this time, she worked as a journalist at El Mundo covering economic topics; she also developed her data analysis skills. In addition, she was able to grow as a journalist because of the recognized journalists she worked with. Furthermore, she was exposed to the ethics of journalism through day-to-day decision making. Since 2021, Liz works at an Ecuadorian digital media company, GK, where she writes about social issues such as medical supply shortages, mental health struggles, and migrations through narrative journalism.