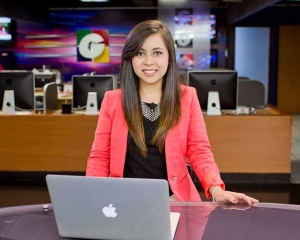 Maria Lourdes Hercules was a 2016 Professional Fellow from Latin America with ICFJ.

Maria was born in Guatemala City. Since she was six years old she started writing and loving all everything about grammar. Her mom is a teacher and her dad works as a business administrator. No one in her family is a journalist, but she grew up doing three things: playing football, acting in plays and writing. In 2011 she started studying journalism at the university and there Maria found what she wanted to do for the rest of her life. She got a scholarship to study in one of the most prestigious universities in her country and it gave her the opportunity to have internships in some media companies. In 2014 she received a work proposal to be a TV reporter at a news program in Guatevisión. She started working there and soon she was placed in the political section of the newsroom. In 2015 she got one of the most fascinating experiences that a journalist can have: A political and citizen revolution that changed everything in her country. She tries to do unconventional journalism in an underdeveloped country.