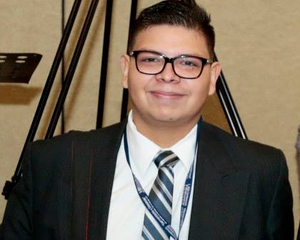 Oscar Portillo is a 2019 Professional Fellow from Latin America with ICFJ.

Oscar Portillo was born in San Salvador (El Salvador) in 1991. During high school he got interested in audiovisuals and began to experiment with stop motion and later went on to win a prize for “Best Film Technique". In 2009, he filmed his "opera prima" under the title: "Sonata Mortem". Two years later he joined the Universidad Tecnologica de El Salvador in pursue of a Bachelor of Science in Communication. During his third year of undergradadute studies, his professor encouraged him to engage in professional practices with the underground newspaper Diario CoLatino; that same year he received an internship opportunity at the U.S. Embassy of El Salvador. As a result of this internship, Oscar was able to enhance his photography and video skills and credits that experience as the corner stone to his career. In 2016, he was hired at El Diario de Hoy as a multimedia journalist. Through his work with documentaries, Oscar aims to empower minorities and expose the problems within his country.