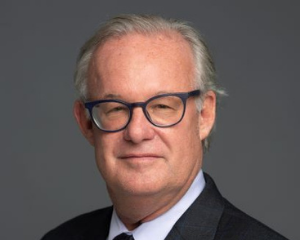 Rob Rehg plays a key leadership role as Awards Dinner Chair and Board Director of the International Center for Journalists.

Rehg has worked in public relations, journalism, politics and public affairs for more than 25 years. With Edelman, Rob has worked in reputation management, corporate communications, crisis and issues management, mergers and acquisitions, and coalition programs in a wide range of industries.

For Edelman, Rob managed the rollout of reports for the 9-11 Commission and Iraq Study Group, crisis communications for the American Red Cross, and integrated educational advocacy programs for the nation’s oil, freight rail and auto industries. His clients have included The American Petroleum Institute, AT&T, Boeing, Business Roundtable, GE, Nissan, USAir, S.C. Johnson and Wal-Mart. His management of international clients includes work for the governments of Chile, Portugal, Korea, Malawi, Angola, India, and government agencies such as the Panama Canal Authority.

In addition to his work at Edelman, Rob has served as director of communications for the Archdiocese of Baltimore, working with the National Conference of Catholic Bishops where he coordinated media activities for Pope John Paul II's visit to Denver as part of World Youth Day. At Edelman, he worked with The Church of Jesus Christ of the Latter-Day Saints for 12 years. In politics, he was chief of staff for Michigan Rep. Bill Schuette and director of communications and policy for Michigan Rep. Dave Camp.

As a journalist, Rob worked as a congressional correspondent for Hearst Newspapers' Washington Bureau, writing for newspapers in San Francisco, Los Angeles, Seattle, New York, Texas, Michigan, Illinois and Florida. Prior to joining the Washington Bureau, Rob was an editor, political columnist and reporter for Hearst Newspapers in Michigan and Illinois, and a radio reporter for stations in St. Louis, Missouri.

Rob has a bachelor’s degree in journalism and mass communications from Southern Illinois University. He was an adjunct professor for the University of Virginia’s professional education program, teaching courses in reputation management, media relations and public relations for several years.