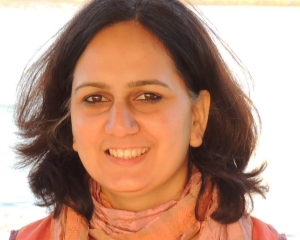 Shalini Joshi is the Executive Editor and co-founder of Khabar Lahariya - India's only independent, digital news network available to viewers in remote rural areas and small towns. Joshi transformed Khabar Lahariya from one edition of a printed newspaper to an award-winning digital news agency available to over ten million viewers. Joshi has a sophisticated understanding of local politics and media, and the ways in which they can inhibit rural women from participating in the public sphere. Her understanding of rural contexts has enabled her to design robust editorial and governance systems for Khabar Lahariya. This same understanding has allowed her to train and establish teams of rural women as credible journalists in rural areas, in a context where no structures of support exist for them.

In 1997, Joshi began her professional journey with Nirantar, a non-profit organization. She was part of the senior leadership of the organization and its Director from 2009-2013. Khabar Lahariya, started as a project of Nirantar, which later expanded and grew into an independent organization that Shalini led from 2014 onwards

As part of ICFJ's partnership with Proto on the TruthBuzz program, Joshi will work on research projects exploring how rural Indians consume news, information, and misinformation.