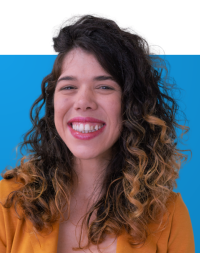 I was born in the suburbs of Rio de Janeiro, where violence by the state and armed groups is a daily occurrence. I understood very early the importance of access to information and freedom of expression as a fundamental human right for the consolidation of other social rights. I grew up with journalists who dedicate their lives to telling stories so that reality is not made invisible or forgotten. We live in a world of cruel inequality and violence. But I strongly believe that support networks and joint action can transform it.

I lead and manage a variety of programs at ICFJ. As a program consultant, my job is to ensure that as many journalists as possible around the world can take full advantage of the initiatives carried out by ICFJ in partnership with other actors. ICFJ gave me the opportunity to join three of my passions at one single job: journalism, project management and community.

My background: I'm a journalist with a master's degree in political communication and a fellow at Open Heroines program, which brings together women from Latin America, Africa and the Middle East engaged with open data and civic technologies. I’ve been working with projects and campaigns in civil society organizations for 9 years and counting, including AfroReggae, Amnesty International Brazil and ITS Rio, where I acted as a senior researcher and program manager for democracy and technology. I was part of the construction and approval of the Internet Bill of Rights during the period in which I was coordinating the Group for Freedom of Expression of Rio. It is one of the most important laws in the world regarding rights and duties on the internet.

I develop research and projects in the areas of public security, disinformation, freedom of expression, digital rights and political discourse. I mobilized over 40 Brazilian journalists from big newsrooms to small independent media outlets to write about automation and disinformation. I developed, with IFCN, the Portuguese version of the ChatBot project about COVID-19. I recently participated in the first report on political bots and online violence against journalists in Brazil. I have already been awarded for the investigative report, "Underreporting of homophobic crimes: the invisible face of violence."