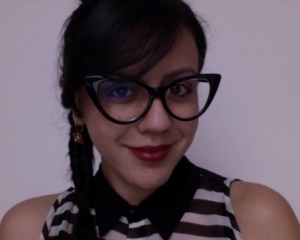 Viviana Andrea Aguilar Cordoba was a 2015 Professional Fellow from Latin America with ICFJ.

A social communicator and journalist with over five years of experience in radio, Aguilar recently finished a Master’s degree in International Journalism at UNED Madrid. She is currently a foreign news editor at Caracol Radio, the biggest radio station in Colombia. She was born in Bogota 26 years ago, and her biggest passion is to travel around the world and learn as much as possible about other countries and cultures in order to combat stereotypes. Since the beginning of her career she has been interested in global politics, so she’s traveled as a special envoy to many countries in Latin America to cover presidential elections (Venezuela, Chile, Ecuador) or conduct investigative work (Panama), and to report on religious conflicts in the Middle East (Palestine, Israel). She speaks English, is proficient in French, and is currently studying Arabic.