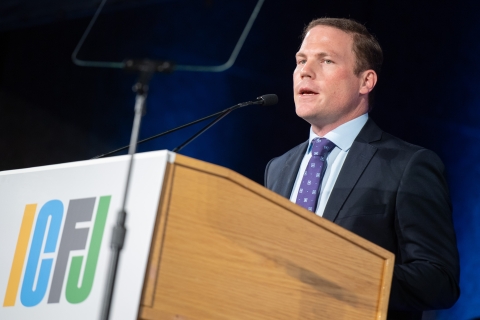 Five years ago, shadowy offshore companies started buying up the Venezuelan news media. This happened at my paper, El Universal.

At the time, I was investigating money laundering. But suddenly, I didn’t even know who was paying my salary.

So, I left and formed the adventure of Armando.info.

I think of journalism as a series of unexpected adventures that have led me to this podium. Receiving this award is one of the most amazing surprises in my adventures in journalism. I want to thank the International Center for Journalists and the jury for this distinction.

I accept this recognition with humility, as an honor not only for me, but for the work that we do at Armando.info and for Venezuelan journalism as a whole. Despite our circumstances, Venezuelan journalists have shown their bravest side in recent years.

There is not only a shortage of food in my country. There is also a shortage of sources of information and of freedom of expression.

I started college in 1998, the same year that Hugo Chávez seized power. Since then, I have worked as a journalist during a time when authorities hide the number of murders and the monthly inflation rate, as if they can erase that we are one of the most violent countries in the hemisphere or that we have been left penniless by hyperinflation.

At first, officials started by denying information. Then, they closed the doors and cut off the telephones. Next, reporters were attacked while they were covering the news. Later they closed or took over news organizations. Now they block web pages. They prosecute journalists, or cancel their passports. They have gone so far as to cut the electricity at radio stations.

Today, in Venezuela, information is criminalized.

My colleagues and I could go to jail for having reported the truth on the food corruption scandal. But we know that one of our greatest challenges is to explain that corruption is not just an economic issue. Corruption also kills.

And corruption knows no limits. The Odebrecht scandal led us to companies which are investing in construction projects in Boston. We must be aware that what happens in one little country often rebounds into another.

I want to thank all of my colleagues at Armando.info in Caracas, who work bravely despite few resources. I especially thank my colleague in temporary exile, Roberto Deniz, and my co-founders, Emilia Diaz, Alfredo Meza and Ewald Scharfenberg. Five years ago, Ewald called us to say: We cannot stay silent, watching the funeral of the traditional media.

I’d also like to thank my parents, Flor and Semi, and my brothers, Hillel and Shamai, for understanding or, at least supporting, this journalism adventure.

What can a Venezuelan journalist offer you tonight? In my experience, when a society becomes polarized, truth is one of the first casualties. Instead of choosing the left or the right, I choose human rights. That has been my compass in this profession, in this adventure. And I hope it always will be.