CBS's Palmer: International Reporting A “Powerful Weapon” Against Those Who Seek To Divide Us 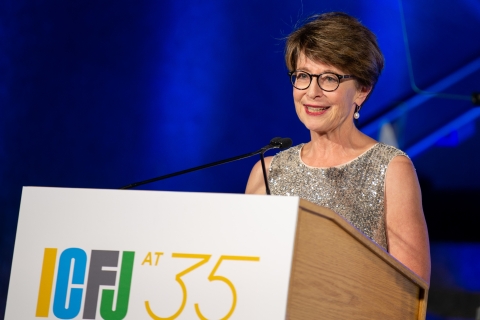 Strong international reporting is one of the most powerful weapons against “dog-whistle populism” and politicians who work to divide people into “us” and “them,” said CBS News senior foreign correspondent Elizabeth Palmer.

In Washington to accept the International Center for Journalists’ Excellence in International Reporting Award, Palmer has spent nearly two decades traveling to global hotspots such as Afghanistan, Iran, Libya and Syria to cover stories of major conflicts and their impact on people’s lives.

“Good international reporting knocks down walls and introduces ‘us’ to “them,” she said. “It underlines that we all inhabit this blue bubble of a planet, currently in such distress.”

She noted that the job often comes with dangers: “I’m often asked what’s it like to come under fire. The answer is, bloody awful.  But not as terrifying as being in an air raid or too close to a car bomb.  I’ve survived all of these in pursuit of the story.”

She added, “It has been a privilege to travel the world -- watching, listening, probing -- and to try to deliver stories that reflect the truth.  Or as close to the truth as we can get.”

Palmer stressed the important role of journalists who cover global stories. She said, “Strong international reporting is one of the most powerful weapons we have to fight the dog-whistle shorthand of populism, the rhetoric of politicians and interest groups who want to convince that we are under threat from a ‘them.’ And the ‘them’ are often conveniently in or from other countries.”

Palmer predicted that the next big international issue for  journalists will be climate change.

“The story of our age is climate change, and it is about to elbow its way onto the news agenda in ways we can’t even imagine,” she said. “It represents a huge and unique opportunity for international journalism -- for fact-based stories that will be essential to our survival and guide the way toward solutions and cooperation.”

She also predicted that journalism will rise to the occasion: “I have no idea how that journalism will be shared, or paid for, but it will be led by young reporters using the next generation of technology – reinventing the old craft of fact-based reporting for a new age,” she said.