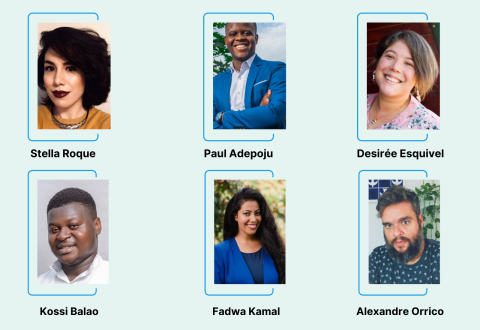 The Forum, a program that ICFJ launched in March 2020 in partnership with its International Journalists' Network (IJNet), has connected about 13,000 journalists with experts—the world’s top health practitioners, policymakers and trainers—who provide skills and information to support accurate reporting on the pandemic. Reaching professionals in 134 countries and in five languages, the program offers journalists:

"The selection committee unanimously agreed that their diligent work to build this forum was not only timely and necessary, but has the potential for long-lasting impact as it becomes a valuable resource for journalists focusing on public health crises now and in the future," said Irving Washington, ONA CEO and executive director.

“Helping Journalists Cover the Story of Our Lifetimes”

From digital journalism techniques and combating disinformation to science topics and self-care, the ICFJ Global Health Crisis Reporting Forum has organized more than 220 vital webinars and trainings for journalists to date.

This work is led by community managers who find top trainers in each of the five languages to help journalists learn the best ways to tell complex health stories to their audiences and develop skills they can adapt to any story. The languages are Arabic, English, French, Portuguese and Spanish.

Through Facebook groups and mailing lists, the community managers also promote cross-border collaboration on pandemic stories and information sharing. They have developed innovative ways to engage and grow their communities—with interactive surveys, a global reporting contest in each language and monthly “coffee with journalists” to encourage collaboration.

“This innovative team has led the world in helping journalists cover the story of our lifetimes as the pandemic forces all of us to become science experts,” said Patrick Butler, ICFJ’s vice president of content and community, who  oversees their work. “They are a perfect example of how global cooperation is more important than ever.”

Roque is ICFJ’s director of community engagement based in Washington, D.C. In partnership with every team across ICFJ, she designed and launched the Global Health Crisis Reporting Forum as the institution’s global response to the COVID-19 pandemic. Roque has over ten years of experience in digital media and communications and has worked primarily with investigative journalists, including the Organized Crime and Corruption Reporting Project (OCCRP), an ICFJ partner.

Adepoju is a Nigeria-based freelance journalist, academic and author. Adepoju covers health, science and tech in Africa and his stories have been published by major outlets, including Nature, The Lancet, the British Medical Journal, New Scientist, Devex, CNN, Health Policy Watch and Quartz. With a core background in science, including a PhD in the genetics of infectious diseases, Paul is bridging the gap between journalists and scientists by facilitating training sessions on science communications.

Balao is a multi-award-winning science journalist, president of the French-speaking African Science Journalists Network (RJSAF) and a former francophone correspondent for the Committee to Protect Journalists (CPJ). Apart from being the founder of The Confidential Report, he's a contributor to various media outlets, including Scientific African Magazine. Balao has travelled to and covered science, health, energy and environment in Italy, Portugal, Switzerland, France, Germany, China, the United Arab Emirates and South Africa.

Esquivel is a freelance journalist, photographer and consultant. She serves as the ambassador in Paraguay for SembraMedia, an ICFJ partner, and coordinates Guarani-language translations for journalist resources on PortalCheck. In 2017, Esquivel co-founded Ciencia del Sur, the first Paraguayan digital media outlet for science journalism. She has worked with a variety of media in Paraguay and internationally, as well as published literary texts and essays. She also directed the documentary “De Auschwitz a Hohenau,” an audiovisual that complements the book “Mengele” by journalist Andrés Colmán Gutiérrez.

Kamal is a digital expert and new media trainer. She is the founder of Hacks/Hackers-Casablanca and the Moroccan Laboratory to debunk fake news. In 2017 and 2018, Kamal trained hundreds of journalists for Google News Lab, the World Bank and Code for Africa. In addition to her community manager role, Kamal serves as a coordinator for the ICFJ and Facebook Social Media Solutions program. She holds an MSc in European studies, an MSc in international political economy, and an MA in auditing and management control. She also completed her studies in media and intercultural dialogue.

Orrico is a Brazilian journalist and specialist in content strategy. He also is the founding editor of Núcleo Jornalismo, a platform created to investigate the impact of social media on people's lives. For years he was a reporter and editor of the technology section of Folha de S.Paulo, Brazil’s largest newspaper, where he traveled to more than 10 countries to cover industry launches and conduct interviews. He also spent four years helping establish BuzzFeed Brasil.