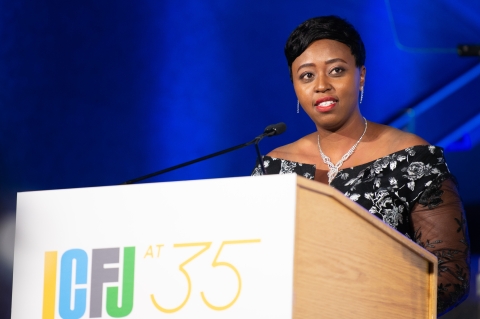 Kenyan TV reporter Rose Wangui doesn’t shy away from taboo subjects. She has  tackled topics such as sexual bondage of young girls, violence against Kenyan women workers overseas, and squalid school conditions where children lack even desks or pencils.

Her mission is clear: “Journalists should strive to tell stories that change people’s perceptions and make society better,” she said as she accepted the 2019 Knight International Journalism Award in Washington, D.C., given by the International Center for Journalists.

Her stories have done just that. They have sparked national debates about subjects that had received little or no attention and spurred improvements in society. A features reporter at NTV, the television arm of the Nairobi-based Nation Media Group, Wangui produced a series of stories in 2011 on the devastating effects of female genital mutilation, which prompted the Kenyan parliament to ban the practice.

Two years later, she produced a powerful documentary titled “Beads of Bondage” that exposed a practice called “beading” in remote Kenyan villages. Under this practice, grown men adorn girls as young as 10 with necklaces of colorful beads that allow them to claim the girls as sexual partners for years without marriage. If pregnancy results the girls are subjected to a crude and painful form of abortion. After the story aired, funds were raised to build a shelter for young victims.

After Wangui’s report on children with both male and female sexual traits -- called intersex person -- the Kenyan government became the first in Africa to include them as a category in the national census. Officials also asked her for her insights and relied on her story to develop policies that protect the rights of intersex people.  Advocates for intersex people said this recognition would help safeguard their rights.

Last year, Wangui’s two-part series “Slavery in the Gulf,” focused on the perils facing tens of thousands of Kenyan women who travel to the Persian Gulf states to work mainly as domestics servants. Breadwinners for their families, the women often face violence, exploitation and abuse. Wangui told the heart-wrenching story of four families whose daughters died in mysterious circumstances in Saudi Arabia. As a result of her reporting, Kenya’s labor minister launched an investigation into the employment agencies that sent the women to the Gulf States.

“We have a duty to shine a light into the deepest recesses of the human experience and provide a mirror for society to examine itself,” said Wangui.  “Isn’t that what the media is supposed to be all about — expanding the discussion space by generating debate on issues that affect us?”