Key Quotes from #PROTOCall: How to Chase the Gaps in COVID-19 Data 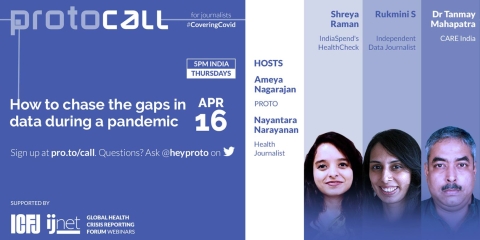 Finding accurate and reliable data on the spread of COVID-19 has been at the center of every journalist’s effort in covering the pandemic and its resulting societal impacts. But what can reporters do when faced with scarce or incomplete data sources?

Here are some key takeaways from the discussion:

Raman is part of a team that runs Indiaspend’s Health Check project, which has been providing daily coverage on the COVID-19 pandemic. She says the biggest gap the team has experienced is a lack of granular data on the recorded cases and deaths in India. The data, for example, is not broken down by age, gender or whether someone has an underlying condition.

“Another challenge we have experienced is shifting parameters, for example with data released on testing,” she said. “(The health ministry) first released testing data on March 23, showing the number of people tested daily. This stopped for a while and on April 2, they released more data, but this time on the number of people who have tested positive for COVID-19 each day. This makes it hard to compare historical data because the parameters have changed.”

Raman recommends that journalists stick to one data source in order to avoid discrepancies in their coverage. “Different sources will often use varying parameters when collecting data, which makes it hard to compare. For purposes of analysis and historical comparison, it is better to refer to one source,” she said.

On the importance of identifying trends in data

Dr. Mahapatra recommended that journalists pay most attention to the trends in the data, as COVID-19 is a novel virus with a lot to be discovered about its behavior. He said that identifying trends will be key in informing research and decision-making around guidelines to properly control the disease.

But, he said, different countries have different testing capacities and strategies, which yield different trend results. “Suppose that in India, we are only testing symptomatic cases for a disease where 80% of the infected show either subclinical or mild symptoms,” he said. “Then we are going to have a much lower number of cases identified in India, as opposed to any other country which is also testing those who are asymptomatic.”

Mahaptra added that the only way to extrapolate a country’s burden of the disease is to test a representative sample of the population, from both the symptomatic and asymptomatic.

On dealing with data gaps

Srinivasan said that journalists should always be upfront with the audience on any gaps identified with data. She warned against fixating on shortcomings in the data as this could result in a feeling of helplessness where journalists are unable to move forward with the reporting.

“Most data we are seeking is data that many countries don’t have the statistical capacity to give right now. This should, however, not stop us from reporting further,” she said.

Srinivasan recommended that journalists find ways to overcome data gaps, such as by focusing on smaller, more manageable geographical areas. In doing so, reporters can use the snowballing strategy by, for example, identifying positive cases that arrived through inbound travel and then tracing their immediate contacts in order to fill in the gaps with qualitative reporting.

In cases where governments have shown the capacity to increase data gathering, including through expanded testing programs, Srinivasan urged journalists to hold government officials accountable when they fail to provide such numbers.

Watch the webinar here, read recaps of previous webinars here and sign up here to join the next PROTOcall.