Leading Mexican Journalist Says She Worries about the Trump Presidency 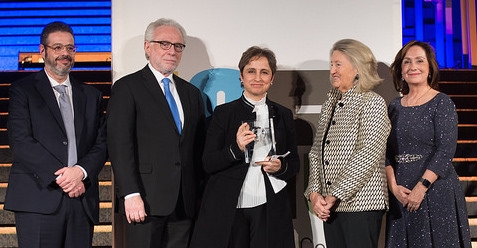 Carmen Aristegui (center) said a free and independent press is needed to respond to the challenge Trump presents.

A prominent Mexican journalist said a Donald Trump presidency would be catastrophic if he carries out his campaign pledges to build a border wall or take economic steps against her country. She said a free and independent press is needed to respond to the challenge he presents.

“Trump has unleashed the worst hatred and has given force to racism and xenophobia,” said Carmen Aristegui in accepting the Knight International Journalism Award given by the International Center for Journalists. “That is why the world is so frightened, and why we must use the tools of democracy and human rights to face the time that is approaching.”

Aristegui is founder of the groundbreaking web site Aristegui Noticias, known for exposing corruption by the rich and powerful in Mexico. She accepted the Knight Award on behalf of her intrepid team of reporters, noting that Mexican journalists face tremendous threats working in one of the world’s most dangerous environments for reporters.

“In some parts of Mexico, an inconvenient journalist can be silenced -- even murdered -- and almost nothing will happen,” she said. “ If the journalist has a certain public presence, he or she can be persecuted with lawsuits whose goal is not to obtain justice, but rather to take revenge for what we print.”

Shortly before arriving in Washington, she learned of the judgment issued in one of the several cases against her for a book about the Mexican White House scandal uncovered by her team last year. “It is an odd ruling,” she said. “The judge charged me with ‘excessive use of freedom of expression.’ ”

Aristegui said the Knight Award was a boost to the work of Aristegui Noticias, which now boasts more than 6 million Twitter followers. It sends a powerful message to Mexico, she said. “A message that says no to censorship, no to the persecution of journalists, yes to free expression and yes to the right of the people to be informed.”

ICFJ, Hampton University Team Up to Offer Students Opportunities in the Field of International Journalism

The International Center for Journalists and the Scripps Howard School of Journalism and Communications (SHSJC) at Hampton University have forged a new partnership designed to help students succeed in international journalism careers. The new partnership, which includes an internship program, aims to provide equitable opportunities for underrepresented communities in the field.

#HoldTheLine Coalition Welcomes Reprieve For Maria Ressa, Demands All Other Charges and Cases Be Dropped

The #HoldTheLine Coalition welcomes a Manila court’s decision to dismiss the second criminal cyberlibel charge brought against celebrated American-Filipino journalist Maria Ressa but demands the immediate withdrawal of all other charges and cases filed against Ressa and her news website Rappler.