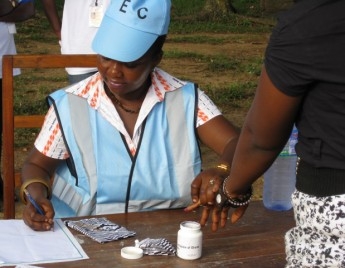 GotToVote is helping voters in Ghana find their nearest registration center ahead of the country's 2016 elections.

An innovative tool developed to help people register to vote in Kenya is proving to be a valuable asset to voters across the African continent.

GotToVote was created in 2012 by two software developers under the guidance of ICFJ’s Knight International Journalism Fellow Justin Arenstein for use during Kenya’s general elections. In just 24 hours, the developers took voter registration information in a government PDF and turned it into a simple website with usable data that helped people locate the nearest voting center where they could register for elections. Kenyan media drove a large audience to the site, which resulted in a major boost in voter registrations.

Since then, GotToVote has helped people register to vote in Malawi and Zimbabwe. Now, it is being adapted for use in national elections in Ghana and Uganda in 2016.

Ugandan civic groups led by The African Freedom of Information Centre are planning to use it to help people register, to verify registrations and for SMS registration drives. They are also proposing new features—including digital applications to help citizens post issues of concern and compare political positions between parties and candidates so voters better understand the choices they are being offered.

In Ghana, GotToVote is helping citizens find their nearest registration center to make sure they are eligible to vote in that country’s 2016 national elections. The tool, which is optimized for mobile devices, makes voter information easily accessible to the public. It explains who is eligible to register for the 2016 general elections and gives a simple overview of the voter registration process. It also tells users what documentation to take with them to register.

Arenstein says GotToVote is having a wide impact across Africa, as citizens throughout the continent seek transparency and a voice in the election process. “This is more than a software solution,” Arenstein says. “We’re designing political accountability.”

The successful experiment provides a number of lessons about the power and feasibility of open data projects, showing that they don't require large teams, big budgets or a lot of time to build.