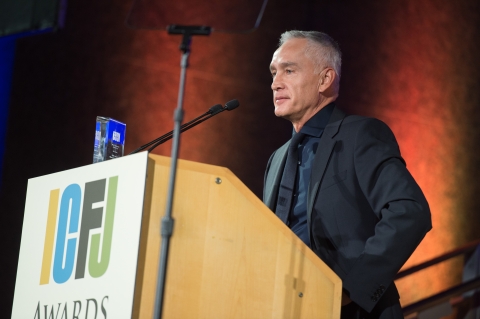 "Our place is…outside the circle of power,” said Ramos. "Our role is to be the anti-power."

Univision anchor Jorge Ramos, who famously faced down presidential candidate Donald Trump over immigration, urged journalists not to back down when it comes to confronting those in power.

Ramos, widely considered the most influential Hispanic broadcaster in America, said he is a journalist rather than an activist as some have suggested. But he also said that journalists should take a stand on key issues such as human rights, discrimination and corruption.

“I will not apologize for asking tough questions to a presidential candidate who is offending immigrants, women and other candidates,” he said. “Our place is not to be with the powerful but outside the circle of power. Our role is to be the anti-power.”

Ramos, who co-anchors the nightly newscast on Univision and hosts other programs on the Spanish-language network and its English counterpart, Fusion, reaches a daily audience of 2 million in the United States and millions more across Latin America.

He received the Founders Award for Excellence in Journalism at the International Center for Journalists’ annual Awards Dinner, in recognition of his distinguished career as a reporter, war correspondent and television anchor. More than 500 media leaders and supporters attended the gala, with CNN’s lead political anchor, Wolf Blitzer, serving as master of ceremonies.

“We, as journalists, have to take a stand when it comes to racism, discrimination, corruption, public lies, dictatorships and human rights,” said Ramos, who is often referred to as “the Walter Cronkite of Latino America.” “It’s not only the right thing to do, but it is our duty to take a stand in those cases.”

Most journalists failed to ask the tough questions, he said, when President George W. Bush took the United States into the Iraq War in 2003 based on wrong information about Saddam Hussein possessing weapons of mass destruction. “The consequences are here to see: Thousands have died, Iraq is not a democracy and ISIS is a new threat to our national security.”

Ramos said journalists should not lose time when challenging those in power. “We can’t wait to ask those questions after the election,” he said. “No, the tough questions have to be asked now, right now. So take a stand, and don’t apologize for that.”

In the now-famous confrontation, Trump threw Ramos out of a press conference after he pressed for answers on Trump’s controversial views on immigration. “What Donald Trump said about Mexican immigrants was wrong and false,” said Ramos. “No, the vast majority of Mexican immigrants are not criminals, are not drug-traffickers and are not rapists. I clearly felt that Trump was promoting bigotry and discrimination with his speeches and that it was dangerous for a presidential candidate to attack immigrants and Latinos.”

Watch his remarks or the tribute video.