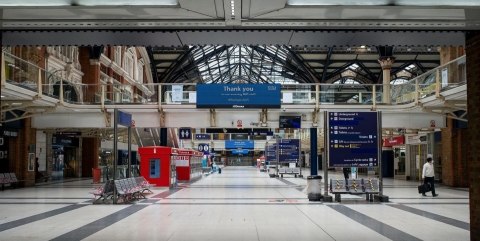 In late March, the World Health Organization discouraged people from wearing face masks in public unless they were showing flu-like symptoms. Less than a week later, the Centers for Disease Control changed that advice.

In January, when COVID-19 had just begun to reach the shores of Europe and the Americas, the most widespread advice was to simply wash your hands for 20 seconds. Three months later, one-third of the world’s population is on lockdown.

We are living in a reality seemingly pulled from a dystopian science fiction novel. Now, people are scared and looking for answers. With much still unknown about COVID-19, these answers often aren’t readily available. Meanwhile, data and expert advisories change frequently.

I spoke to journalists from Vox, Mother Jones and The New York Times about how they report the ever-changing facts of the pandemic.

Rely on experts who are doing the work

Vox reporter Umair Irfan wrote an article about the dozens of vaccines in the works to combat coronavirus —  just when the United States surged ahead in most confirmed cases in the world. He and two colleagues gathered and reported information from the National Institutes of Health, the Coalition for Epidemic Preparedness Innovations and the National Institute of Allergy and Infectious Diseases, among other institutions and companies working to find a vaccine.

Irfan has found his relationships with researchers, scientists and medical professionals valuable for verifying and developing a deeper understanding of the information he’s reporting in an article. This is especially so when working under a deadline.

“They’re just as busy as we are, if not moreso,” said Irfan. “But for the most part, once you’ve built a relationship with a source, people will be more responsive. Good for a quick fact check here and there.”

“I’ve relied a lot more on the work of scientists, epidemiologists and institutions, and their data, instead of collecting data and doing all the analysis myself,” said Rangarajan. “That’s something we just don’t have time for.”

Fact-check before a deadline. Understand things will likely change after you publish

A lot of reporting around COVID-19 includes estimates and projections, from projections of deaths to when economies will reopen. With so many variables influencing numbers, even a seemingly sound prediction might be upended shortly after it’s made.

“Obviously, I try my very best to be as correct as possible,” said Rangarajan, “But [looking at data sources] I was able to see that the information wasn’t up-to-date because it was changing so quickly.”

Rangarajan makes note in her stories of the day the data was collected or predictions were made, and the date they’re being reported. She doesn’t update her stories every day; information is changing so rapidly, it just isn’t feasible. It’s best to make clear in your stories that the information is always subject to change, she said.

For his part, Irfan tends not to rely too heavily on numbers. “I do update stories as information evolves, but because this is such a fast-moving story, we’ve learned not to use firm numbers unless they’re absolutely necessary to the story,” he said.

Be honest with your readers

Rajangarian prioritizes transparency in her reporting on the pandemic. “I’m being very upfront with the reader that this is a particular figure I’ve taken from this particular beat,” said Rangarajan.

For example, an early April story she wrote on states’ supplies of hospital beds, now includes at the top of the article: The coronavirus is a rapidly developing news story, so some of the content in this article might be out of date.

“If there’s something significant, I let my readers know. But I think the most important thing is that they know what they are looking at. Where did I get that number from? Is it from today? From what source? And just being very, very transparent,” said Rajangarian.

Emma Goldberg, a researcher at The New York Times, concurred. “I am making sure to rely on the most informed, up-to-date information for my reporting. But I think it’s also important for reporters to be clear about the limits of our own knowledge of what’s to come in this fast-changing situation.”

Simple language is effective. “It’s much too soon to say why New York has been hit harder — and whether early containment measures by California officials are paying off,” Goldberg and a colleague originally included in an article they published on March 30, and later updated on April 14.

The novel coronavirus pandemic is, in all likelihood, a once-in-a-lifetime situation for the world. As journalists, we are working in an unprecedented, prolonged period of constantly changing information. This being the case, our duty to report facts with transparency remains as critical as ever.

“I’m very aware of the fact that this is one of the stories that we are going to continue to report on for a while, even after everything is under control,” said Rangarajan. “Right now, the value we can add is to start to try to make sense of the world around us, and how it’s changing and reporting on that. But obviously, nothing is tied to stones.”