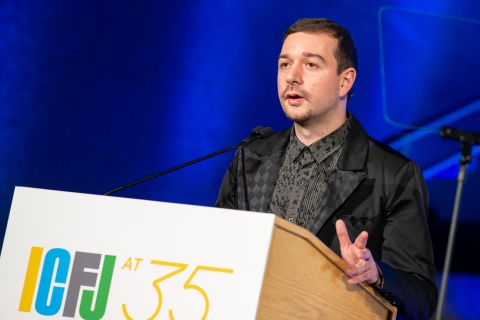 Serbia is a good case study for understanding how autocrats can take over a democracy, said investigative journalist Stevan Dojčinović as he accepted the Knight International Journalism Award from the International Center for Journalists. “All of this happened in my country because democracy is very weak,” but he warned “it could happen here as well.”

As founder of the Crime and Corruption Reporting Network (KRIK) in Belgrade, Dojčinović has exposed abuses at the highest levels of power. He also is a regional editor for the Organized Crime and Corruption Reporting Project (OCCRP), an ICFJ partner. His reporting has made him a frequent target of threats and personal attacks by government allies.

Countries “in the shadow of Russia” have been dealing with “populism, extremism and nationalism” for decades, he said, explaining how a democracy descends into autocracy. “The first goal of autocrats is to undermine the media.”

In Serbia, “the good prosecutors and police were fired and now justice is political,” he said.  “We journalists are the last threat to organized crime and corruption. And the nail that sticks up gets pounded down hardest.”

Dojčinović said he and his team have been pounded repeatedly: “Threats were sent to our newsroom. Homes of two of our reporters were broken into, and we have been targets of surveillance by the secret service… . They even created a fake network of investigative reporters – who seem to only investigate us and other so-called enemies of the state.”

Given all the harassment, he said, “it feels like it has never been as hard as today to tell the truth.” The truth tellers in Serbia are holding their own for now, he said, “but in the long run it’s not going to work.”

The news industry needs new models for funding and collaboration, he said. “It is essential for journalists to make cross-border alliances. We need global cooperation. You have found out you can’t do stories on American politics without understanding Russia and now Ukraine.”

The stakes couldn’t be higher for journalists in Serbia — and the U.S. “If we fail, you will fail,” he said. “We are in the same boat.” By working together, “maybe we can claw back the truth for the people,” Dojčinović said.