These former ICFJ fellows are among the more than 190 alumni of ICFJ’s A Digital Path to Entrepreneurship and Innovation for Latin America, a program supported by the U.S. Department of State’s Bureau of Educational and Cultural Affairs. As part of the program, fellows sharpen their skills by embedding at digital-first media organizations, the digital teams of traditional media and innovative start-ups in the U.S.

In 2020, alumni were able to launch or expand 10 journalistic projects through a grant program just for them. ICFJ spoke with some of the grant recipients to learn more about their work and the impact they are having.

Brazilian journalist Luiz Toledo and his team at the independent data agency, Fiquem Sabendo, are making it easier for journalists to access public records in Brazil. After seeing how few journalists were using Brazil’s freedom of information law to gain access to information that should be public, Toledo launched a newsletter called Don’t LAI to Me. (LAI, or Lei de Acesso à Informação, is Brazil’s equivalent to the U.S. Freedom Of Information Act, or FOIA.) Through the newsletter, he shares public data of interest to journalists and offers tutorials and tips on how they can use the law to dig up information themselves. The newsletter has over 5,000 subscribers today.

Fiquem Sabendo’s focus on information access has helped diversify its readership and promote greater governmental accountability. By creating awareness and providing regular citizens with the tools and techniques necessary to combat information inaccessibility or outright suppression of data, Toledo and his team have created a growing network of pro-transparency individuals that have already begun to transform the journalism scene in Brazil.

“The results have been amazing,” said Toledo, who worked with ProPublica during his ICFJ fellowship. “Just a few weeks ago we were invited to participate in a meeting organized by the public services department of the Brazilian government to take on an advisory role with regards to improving access to information for citizens. We were in direct conversation with the body responsible for information accessibility and transparency.”

Toledo has published articles and videos alongside the newsletter to assist the effort. He has also teamed up with the nonprofit collaborative news site MuckRock to translate English-language articles on data transparency and information accessibility into Portuguese.

“Our goal is simple: to promote information transparency,” Toledo said. “There currently exist numerous barriers to data accessibility in Brazil, but there is a strong will to fight against this.”

Guatemalan journalist Luis Assardo has made it his mission to spread fact-checking knowledge and skills across the Central American country. The founder of the collaborative fact-checking platform Confirmado.org, Assardo broadened the scope of his outlet’s work in 2020 to address misinformation around COVID-19.

Through Confirmado.org’s digital training courses, journalists can educate themselves on open source intelligence (OSINT), disinformation analysis and digital safety. The project has fended off cyber attacks to deliver the in-demand training material across the country, including in rural Guatemala where accessibility can be limited.

Thousands of users have taken advantage of the resources.

“We wanted to ensure that these courses are timeless,” Assardo said. “[We want to] offer the tools that will enable citizens and journalists to generate the appropriate criteria to verify and counteract misinformation.”

Laura Rojas Aponte had long set her eyes — or rather, her ears — on one downside of a democratized podcast industry in her native Colombia: poor sound quality. While anyone can start a podcast if they’d like, this has also fostered a proliferation of low-quality productions.

Rojas Aponte, who is a business development advisor at DianaUribe.fm and the co-host of Cosas de Internet, both Spanish-language podcasts, pointed to The New York Times’ podcast, The Daily, to drive home her point. “Only when they were able to truly capture and share the voices of migrant children detained at the U.S. border did [the childrens’] story truly catapult and garner attention,” she said.

Determined to address the issue, she set out to improve her podcast, Cosas de Internet, and empower other independent podcasters in Bogota. Through her ICFJ fellowship, Aponte and her team were able to train with podcast producer and sound designer, Levi Sharpe. They used what they learned to assemble a free, 18-page “holy grail” audio production guide, titled Sonido Grandioso, or “Magnificent Sound.”

Thousands of journalists, podcasters, media professionals and students alike have accessed Sonido Grandioso. “It is truly astounding when you consider what a hit an information-packed PDF has become,” said Rojas Aponte.

Promoting a New Kind of Storytelling 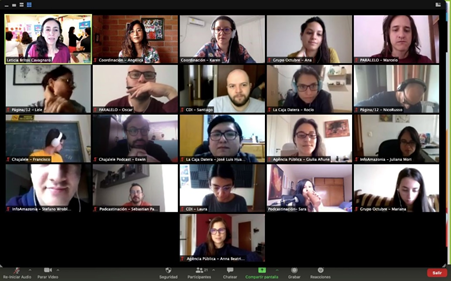 The “do-as-you-go” learning process involves publishing unpolished content, and tracking audience engagement and responses to it. Using these insights, journalists can then adjust their work accordingly.

The workshop produced a variety of practical resources and tools that Cuevas and De La Hoz have collected in a valuable guide, which you can access here.

“One key takeaway from [developing the workshop] is that it is more than possible to apply engaging, collaborative, meaningful and dynamic methods of learning in the midst of a pandemic,” said Cuevas. “[But] more than anything, it allowed us to see ourselves as more than content creators.”

The village of Nosara, in the Guanacaste province of Costa Rica, has long experienced a divide between native Costa Ricans and a large community of expats.

Editor-in-chief María Fernanda Cruz Chaves and journalist Yamlek Mojica, of La Voz de Guanacaste, launched a newsletter to address the issue and empower Nosarans to be more active citizens in the uniquely bicultural village. The newsletter has focused heavily on COVID-19 and its harmful impact on the tourism-reliant economy of Nosara.

They designed a content strategy and restructured La Voz de Guanacaste to meet the needs and interests of their readers — even reaching readers in remote communities with uneven access to technology.

“This represents a unique opportunity to study how we can best establish these communication systems and open up accessibility to information — not just in Costa Rica, but across all of Latin America,” Cruz Chaves said. “In this specific case, it is the chance to connect and amplify the voice of a community that has been historically segregated and abandoned.”

Considering Nosara has a population of only 3,000 inhabitants, Cruz Chaves and Mojica had set a conservative goal of 80 subscribers for the first few months of the project's implementation. They were surprised when, before even launching the newsletter, La Voz de Guanacaste had already accrued over 150 subscribers from Costa Rica and abroad. Thanks to this success, the team was invited to Latin America’s 2020 NoForo in November to discuss innovative newsletter models for smaller communities in Latin America.

“This initiative has been tremendously fulfilling in that we have seen a fully women-led media outlet execute an effective and meaningful project that has brought community interests to the forefront of Guanacaste’s news coverage,” Cruz Chavez said.

The International Center for Journalists (ICFJ) welcomes Brent Jones of The Wall Street Journal and Sophie Schmidt of Rest of World to its board of directors.