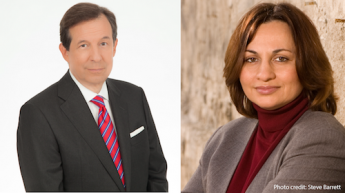 Fox's Wallce and NPR's Nelson are "consummate professionals" and "seekers of substance and truth."

The International Center for Journalists will honor Chris Wallace, the Fox News anchor, and Soraya Sarhaddi Nelson, the National Public Radio correspondent, at its Awards Dinner on Nov. 9 in Washington, D.C.

Wallace, anchor of "Fox News Sunday," is known for bringing a tough, but fair, interviewing style to his coverage of major news events, including a 2016 presidential debate. He will receive the ICFJ Founders Award for Excellence in Journalism for a lifetime commitment to the highest professional standards.

Nelson, the NPR foreign correspondent whose stellar reporting shed light on the daily experiences of people living through turmoil in Afghanistan, the Middle East and North Africa, will be honored with ICFJ’s Excellence in International Reporting Award.

“Both Chris and Soraya are consummate professionals, seekers of substance and truth,” said ICFJ President Joyce Barnathan. “We are delighted to single them out for their excellent work.”

CNN lead political anchor Wolf Blitzer will be master of ceremonies. At the event, ICFJ recognizes journalists whose work has made an outstanding impact on society.

During more than four decades as a journalist at Fox, NBC and ABC, Wallace has applied his unbiased, piercing approach to interviews, whether moderating primary and general presidential debates, interviewing Democratic or Republican presidents, or leading the charge on groundbreaking investigations. Last year, he became the first Fox News host to moderate a presidential debate, earning high praise for keeping both candidates focused on policy issues.

Wallace joined Fox News in 2003. He secured Fox’s first interview with President Barack Obama in February 2009, and interviewed Obama more than anyone else at the network. Prior to that, he worked for 14 years as a senior correspondent for ABC’s “Primetime Thursday,” where he conducted several groundbreaking investigations. During the first Gulf War, he reported from Tel Aviv for “Nightline.” From 1982 to 1989, he worked for NBC in key posts, from chief White House correspondent to anchor of “Meet the Press,” making him the only person to have anchored two Sunday morning news programs.

Nelson, who shared a Pulitzer Prize for coverage of the crash of TWA Flight 800, opened NPR’s Kabul bureau in 2006 and spent 3½ years reporting from Afghanistan. Not only did she cover the war, but she also shared stories about the ordinary lives of Afghans, from teens struggling to get an education to women running for office in the midst of upheaval.

During that time, she also reported on the war in Iraq. She moved to Cairo in 2010, months before the Arab Spring uprisings. She also covered Libya’s violent regime change. She became NPR's Berlin correspondent in 2012, focusing on Europe’s refugee crisis, terrorist attacks and right-wing populism as well as Ukraine’s separatist conflict.

The ICFJ Awards Dinner is Washington, D.C.’s top international journalism event, attracting about 600 media luminaries and supporters. At the gala, ICFJ will also honor the winners of the Knight International Journalism Awards, to be announced on May 31. To learn more about the Awards Dinner or to purchase a ticket, please visit www.icfj.org/dinner.

To meet the urgent need for reliable information, ICFJ promotes a professional journalism whose primary goal is to seek the truth. We help journalists use best practices and new technologies to improve the quality of news media. We believe that better journalism leads to better lives.