ICFJ's groundbreaking research project spanning three years culminates today in the publication in full of The Chilling: A global study of online violence against women journalists. The UNESCO-supported publication features new tools and over 100 recommendations to help fight a global scourge that threatens journalists’ safety and poisons democratic discourse.

The 300-page book has been published to mark the International Day to End Impunity for Crimes Against Journalists. The study, representing collaborative research in 15 countries, is the most geographically, linguistically, and ethnically diverse scoping of gender-based online violence to date.

Edited by ICFJ’s Dr. Julie Posetti and Nabeelah Shabbir, the book draws on the testimonies of more than 850 international women journalists who were surveyed and interviewed. The study was commissioned by UNESCO in 2019, and it has generated multiple publications and policy responses since then.

“The Chilling is a vital, at times gut-wrenching call to action - one that we cannot afford to ignore.” - Nobel Peace Prize Laureate Maria Ressa

Ressa is one of three journalists in focus in big data case studies produced for the book, in collaboration with University of Sheffield computer scientists. The case studies take readers into the core of online violence storms through an analysis of nearly 3 million social media posts.

The Chilling illuminates the evolving challenges faced by women journalists dealing with prolific and/or sustained online violence around the world, including the ways that disinformation and the impact of the COVID-19 pandemic deepen the problem. It also pays careful attention to the nature of intersectional abuse – for example, where racism and bigotry overlap with misogyny as features of online attacks. 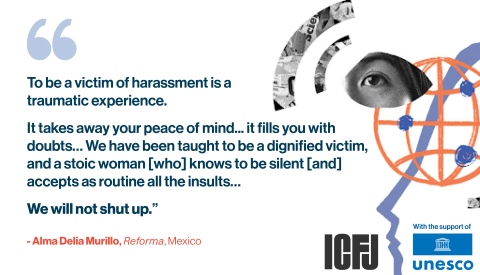 Over the course of the research period leading up to this study's publication, UNESCO and ICFJ published a report presenting the findings of a global survey (2020), a research discussion paper (2021), and two individual chapters extracted from this study: What More Can News Organizations Do to Combat Gendered Online Violence? (2022) and Assessing Big Tech’s Response to Online Violence Against Women Journalists (2022).

A team of international researchers led by ICFJ worked hard during a global pandemic to deepen the research, identify emerging trends, and understand the impediments to more effectively addressing the problem of gender-based online violence against women journalists around the world.

The war in Ukraine had only just begun at the time this study was being finalized in early 2022. However, the function of online violence as a weapon of war was already in evidence.

The publication of The Chilling in full brings to an end ICFJ’s partnership with UNESCO on this vital theme. But ICFJ’s work to improve the lives of women journalists online continues, with the ongoing development of the Online Violence Early Warning System, in partnership with the University of Sheffield.