The latest news from the International Center for Journalists.

Bellingcat would have achieved little without our exceedingly engaged audience – who have been in equal parts our readers, our peer-reviewers and our fellow investigators. And if there’s any innovation that Bellingcat should be credited for, it should not be for the use of open-source intelligence, or for digging through terabytes of data - none of these were invented by or are unique to Bellingcat.

Today, Central American journalists face the most difficult times since the end of our civil wars and military regimes. Hundreds of colleagues have flown into exile, dozens have been imprisoned. Journalism has been criminalized.

Journalists cannot speak out against cases of poverty, murder and corruption. Female journalists are not allowed to attend press conferences. No woman can openly show her face on media outlets. Almost 200 journalists have been arrested and tortured since the takeover.

In late February, as a full-scale invasion of Ukraine by Russia loomed, AP journalist Mstyslav Chernov and freelancers Evgeniy Maloletka and Vasilisa Stepanenko prepared to travel to what they believed would be a key target for Russian forces: the port city of Mariupol on the Black Sea.

These news organizations are among five selected to receive grants – totaling up to $100,000 – to pursue projects that improve their operations and help them become more sustainable businesses. El Pitazo (Venezuela), OC Media (Georgia), Teyit (Turkey), The Centrum Media (Pakistan) and VoxEurop (France) were chosen to receive the funding after taking part in the first phases of Elevate, ICFJ’s news business hub.

10 Types of Mis- and Disinformation to Watch Out For Ahead of the U.S. Midterm Elections

Here’s a breakdown of 10 types of electoral disinformation you are likely to come across on social media, or on the websites of disinformation-peddling outfits masquerading as legitimate media outlets. 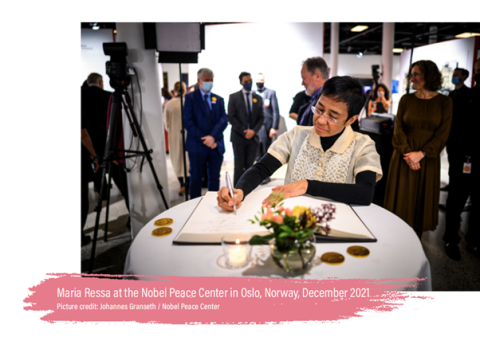 Maria Ressa, a 2021 Nobel Peace Prize laureate, is one of three journalists in focus in big data case studies produced for ICFJ's groundbreaking research project spanning three years, and culminating in the publication of The Chilling: A global study of online violence against women journalists. The UNESCO-supported publication features

ICFJ's groundbreaking research project spanning three years culminates today in the publication in full of The Chilling: A global study of online violence against women journalists. The UNESCO-supported publication features new tools and over 100 recommendations to help fight a global scourge that threatens journalists’ safety and poisons democratic discourse.

How a Reporting Network at the U.S.-Mexico Border is Helping Reduce Corruption

In 2009, a fire at a nursery school in Hermosillo, Mexico, claimed the lives of 49 children and injured more than 40 others. In response, the Mexican government dedicated millions of dollars to helping the victims and their families. But that money seemed to disappear before it reached them.

That is, until investigative reporter Alan Aviña asked the right questions. His investigation revealed that a state official had hired family members to assist her in stealing about $500,000 from the government’s response to the fire. The impact: Mexico’s Institute of Social Services (IMSS) barred the corrupt official from holding public office for the next 12 years.

To bring that corruption to light, Aviña used skills he had learned as a participant in the Mexico Border Investigative Reporting Hub (the Border Hub). ICFJ runs the five-year program in partnership with the Border Center for Journalists and Bloggers with support from USAID.

Dada is ICFJ’s 2022 Knight Trailblazer Award winner. In accepting the honor, Dada hopes to draw attention to the work done by fellow journalists in El Salvador and across Central America who have less of a platform than he does.

Through my work in health journalism, I got more Ethiopian children vaccinated.