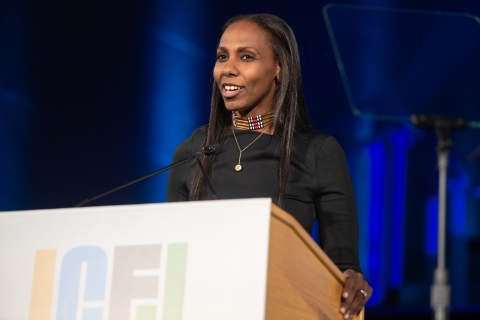 Thank you so much, and thank you to Pamela , for that lovely introduction. It’s incredible to be recognized by ICFJ, especially at a time where the work they’re doing and the support they provide is more necessary now than ever.

There are two lovely things about receiving this kind of recognition. The first - and probably the best - is that you get to thank the people who helped get you there. So here goes; Thank you to my wonderful colleagues at CNN so many of whom are here tonight to support me.

Thank you to my boss, the head of news gathering, who is also my friend: Deborah Rayner. She was an executive producer on so many of the pieces that you saw in that film. She just makes everything better.

And thank you to Raja Razek. She was our producer in Libya and she is amazing. She is not only one of my closest friends, she is one of the bravest women I know. She’s the person you trust to get you out the other side through the gates of hell. She is also the person who can somehow manage to convince militiamen in the dead of night to fix the hot water -  in the dead of winter. So she is a very useful person to have with you, at any point in time.

I’m sure that poor Mark is really not the envy of many people, because I'm pretty sure there aren’t many boys or girls who grow up dreaming of marrying someone who leaves unpacked, messy piles of clothing while she's away and then is permanently exhausted when she's back, but somehow Mark got lucky, but here we are, with a toddler, so he's even luckier than you could possibly imagine. There's also a grumpy 22-month-old in this picture. But he is amazing, and he and my sisters - I love him so much, I love them so much, because they make me possible, and they help us with our little boy. It is the best feeling in the world to know that you're leaving your child with people who love him almost as much as you do. I wouldn't be able to do this if not for them.

I also have to thank my brother, who is the kindest person I know. He and his wife have to deal with the realities of life back home in Sudan, which is incredibly difficult, and yet they are so generous and supportive of me, and that is amazing.

We have a saying back home that strong women bring up strong sons, but I actually think that strong women do something that is much, much harder and much more important, which is that they prepare their daughters for the world that they are going to go into. And I think they arm them, and that's what my mother did for me, so I have to thank her. And I really can only aspire to live up to the example that she and my father set.

I come from a country where freedom of the press isn’t really something people even dream about, but in spite of that, I grew up in a home where I was brought up to believe that what we do as journalists is viscerally important, and that it matters. My earliest childhood memory, or at least I have been told by my parents that it is my earliest childhood memory, is of being three-years-old and attempting to kick the prison guard at Kober prison where my father was being held at the time.

It’s quite possible I only think it’s my earliest childhood memory because my father has told that story so many times. He even told the story at our wedding, in front of my very lovely English in laws. Yes, exactly as embarrassing as you think it was.

But I remember the first time that he actually really told me the story, and that was when I began training with him in his newsroom out of Khartoum. At the time the Sudanese government would place a National Security Officer in the newsroom, and this was at the height of the Sudanese government's repression.

One night I had a particularly ambitious story about Darfur and it was stripped from the paper. In fact, if I remember correctly, I had actually been pretty cocky, and I had put in a reference to government human rights abuses, and my father had a spectacular row with the National Security agent. Being 23 or 24, and you think you know best, and I remember just being incredibly fed up because this was completely pointless, and I said to my father, "Why do you even bother?" And he looked at me and he asked me, "Do you actually properly remember that story? Do you actually properly remember what happened when you were three years old?" And he said, "Do you remember how upset your mother was? And do you remember that she tried to calm you down, and she told you that the guard didn't have a choice?"

And he said to me that actually I needed to know that my mother was wrong: That we all have choices. And my father said that his choice, he chose, to remind that officer that he could censor what he put in the paper, but he couldn't censor what was inside his head - and that's why he had the arguments.

But what makes me optimistic, what makes me keep going, is that I never thought, I never dreamed, when I was watching my father and the officer get into their nightly fights - and honestly, not that you should ever feel sorry for a Sudanese national security officer, but at one point they started rotating them through the newsroom because my father was just so exhausting to deal with on a daily basis. But I just think about that, the decision that you make every day, that no, you don't get to censor what's inside my head. You don't get to write in your little red pens in here. And when I look back from where I am now, and from a place where somehow, I've ended up on one of the largest platforms in the world, and that's not something I ever really, I guess I dreamed of it, of course I dreamed of it, but I didn't really ever believe that I would be here, and that my work would somehow end up on CNN and I'd get to call someone like Wolf Blitzer a colleague.

Even as we think about, and rightly so, protecting our friends and our colleagues, we should think about what life must be like for other journalists around the world, without the benefit of our platforms. Because the reality is that there is a contagion of impunity.

We have to remember that if it’s bad for us, then it’s exponentially worse for everyone everywhere else in the world.

We are allowed to mourn, we are allowed to worry, but then we have to go back to doing the work. Because ultimately, that’s what defines us, and that's an amazing thing. There isn’t a single day that goes by that I’m not proud to have that define me, because there isn't a single day that I'm not proud to be a journalist, because I'm incredibly lucky.