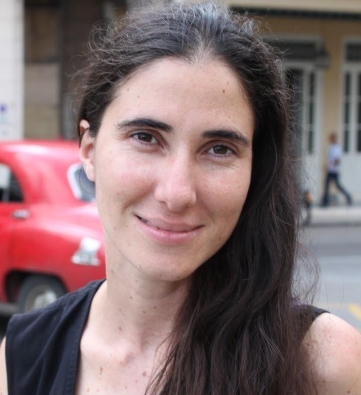 Good evening, I would like to thank the International Center for Journalists and Knight Foundation for believing in me and my work. But most of all, this award means so much because it recognizes the importance of independent journalism in Cuba. Now, I would like to share my story in Spanish.

My grandmother knew how to write only the first letter of her name. She would sign documents with an almost childish-looking capital “A.” In spite of being illiterate, Ana always advised me to study and learn as much as possible.

That laundress who never went to school taught me the best lesson of my life: Tenacity and hard work are needed to accomplish one’s dreams. She instilled in me the urgency of “action.” Action with a capital “A,” like the only letter of her name that she could write.

However, action can become a problem if it is not accompanied by credible information. An uninformed citizen is easy prey for the powerful, a guaranteed victim for manipulation and control.

In fact, an individual without information cannot be considered a complete citizen, because her rights will constantly be violated, and she will not know how to demand and reclaim them.

Authoritarian regimes throughout history have exercised strict control of the media and a high disregard for freedom of information. For these systems, a journalist is an uncomfortable individual who must be tamed, silenced, or eliminated.

These are societies where a journalist is recognized only when she repeats the official government rhetoric, applauds the authorities, and sings praises about the system.

I have lived forty years under a government that considers accurate information to be treason. At first, when I learned to read and began to pay attention to the national media, with its optimistic headlines and data on the country’s economic overachievement, I blindly believed what those newspapers were saying.

That country existed only on the pages of the Cuban Communist Party’s national newspaper. That country was the one my teachers taught me about in school, the one from Marxist manuals and the speeches of our leader. But it did not resemble reality.

From the frustration between my desire to know and the wall of silence that the official Cuban press imposes on so many issues, the person I am now was born.

My first reaction in the face of so much manipulation and censorship – like that of so many of my fellow citizens – was to simply stop reading that press which served those in power, that propaganda disguised as journalism.

Like millions of Cubans, I sought information that was hidden, uncensored news articles, and I learned to hear the radio transmissions coming from outside, even despite government interference in these broadcasts.

I felt I would drown if I weren’t informed. But, then another moment came. A moment when I switched to “action.” It wasn’t enough to know everything that was being hidden from me and to decipher the truth behind so many false statistics and grandiose words. I wanted to be part of those who narrated the Cuban reality.

That is how I began my blog Generation Y in April of 2007, and how I took the path of no return as a reporter and journalist. A path filled with danger, gratification, and great responsibility.

During the past eight years, I have lived all of the extremes of the journalistic profession: the honors and the pains; the frustration of not being allowed to enter an official press conference; and the marvel of finding an ordinary Cuban who gives me the most valuable of testimonies.

I have had moments when I have exalted this profession, and moments in which I wished I had never written that first word. There is no journalist who does not carry the burden of her own demons.

Now, I lead a media outlet, 14ymedio, the first independent news platform inside of Cuba. I am no longer the teenager who turned her eyes away from the official press, looked for alternative news sources, and later began her own blog as if she were someone opening a window into the secrets of a country.

I now have new responsibilities. I lead a group of journalists, who every day must cross the lines of illegality to perform their jobs. I am responsible for each and every one of the journalists who are a part of our news platform’s editorial team.

The worst moments are when one of them takes longer than expected to return from covering a story, and we have to call their family to say that they have been arrested or are being interrogated.

I feel that if we had moved towards action, and if we had exercised our right to inform much earlier, Cuba would now be a country where a journalist would not be synonymous with a tamed lapdog, or a furtive criminal. But at least we have begun to do it.

We have moved from information into action, to help change a nation through news, reporting, and journalism. It is Action with a capital “A,” like the one my grandmother wrote on those papers, never really understanding what they said. Thank you.