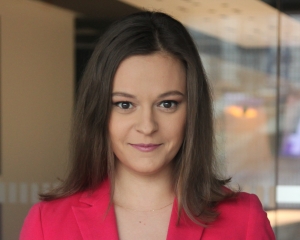 Alexandra Albu is an International News Correspondent for Digi24, the main TV news station in Romania. Before joining Digi24 in 2015, she spent eight years covering foreign affairs at Realitatea TV, Romania’s first ever 24 hour news station. Alexandra reported on location for the Ukrainian President election in May 2014, and covered the State of the Union address by the European Commission President in September 2016. Over the course of her career, Alexandra has covered major international news including: the financial crisis, the Arab Spring, election of Barack Obama, war in Ukraine, terrorist attacks in Paris, and the attempted coup in Turkey. When not writing or reporting, she does simultaneous translation from English and French to Romanian during live news programs.