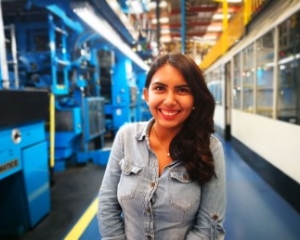 Andrea Valeria Guzman Castilo is a 2018 Professional Fellow from Latin America with ICFJ.

Valeria is a Salvadoran journalist working since 2016 for Séptimo Sentido, an investigative journalism magazine produce by La Prensa Gráfica, a major newspaper. As a journalist for Séptimo Sentido, she has covered human rights issues, social violence, culture, inequality and gender-based violence. She graduated in social communications from Central American University José Simeón Cañas. In 2016 she received a recognition from the Salvadoran Institute for the Development of Women for her work covering violence against women. Valeria started her career in 2013 as an intern for El Faro, a digital newspaper, where she was hired to report on corruption, politics and historical memory.