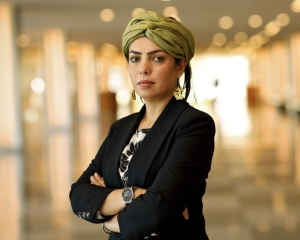 Anisa Shaheed is the winner of the 2022 ICFJ Knight International Journalism Award.

Anisa Shaheed, a veteran television journalist known for fearless coverage of human rights, violence and corruption in Afghanistan, is a 2022 recipient of the Knight International Journalism Award presented by the International Center for Journalists.

Shaheed grew up under the Taliban’s harsh Islamic rule when women and girls were held back as second-class citizens. After the Taliban lost power in 2001 and new opportunities opened up for women, she attended university and launched her journalism career.

Based in Kabul, Shaheed first worked as a reporter for the Cheragh Daily Newspaper and News Chief for Hindu Kush News, then joined independent television channel TOLOnews in 2009. She worked for TOLOnews for 12 years before she was forced to leave Afghanistan when the Taliban returned to power in 2021.

In a country known as one of the most dangerous in the world for journalists, Shaheed faced the double threat of being a journalist and a woman. She risked her safety to cover a vicious terrorist attack on a maternity hospital where 22 people were killed, including women who were shot while delivering their babies.

She risked her health to report on the ravages of COVID-19 and the Afghan government’s mishandling of resources meant to combat the disease. And when a senior Afghan official came forward in 2016 to say that he had been kidnapped and sexually abused on the orders of the vice president, he sat down with Shaheed for an interview. The allegations sparked a public outcry and charges were brought against the vice president, who went into exile.

In 2020, Reporters Without Borders recognized her as one of 30 international “information heroes,” and in 2021 Afghanistan’s Free Speech Hub named her journalist of the year.

Shaheed continues to provide insightful coverage of Afghanistan from exile, as a freelancer based in the United States.