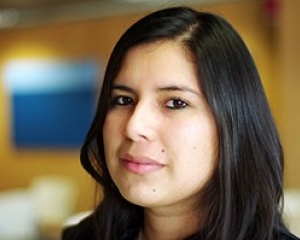 Daniela is an Ecuadorian investigative and data journalist. She is co-founder of LaHistoria.ec, a journalist site that was born as a space to report freely amid the censorship caused by Ecuador’s communication law. In LaHistoria.ec, she published “Chevron’s Case: Story of the Forgotten,” which won the Lorenzo Natali Media Prize 2015 from the European Commission. Daniela is a contributor to the online magazine Mongabay Latam, which covers in-depth environmental and indigenous issues. She is also the Ecuadorean contact for Connectas, a Latin American platform for investigative journalists. Last year, she spent a semester in Bogotá working with the organization as a resident journalist. Daniela started her career in 2010 in the regional newsroom of Ecuadorean newspaper Hoy, where she covered political, judicial and social issues stories and wrote for the investigative supplement Blanco y Negro. There she fell in love with the job and realized that good journalism can change people’s lives for the better. At the end of 2012, she traveled to Spain to pursue a master’s degree in investigative journalism, data and visualization. At the end, she worked for a few months in El Mundo newspaper’s main office in Madrid and continued to collaborate for the publication when she came back to her country.