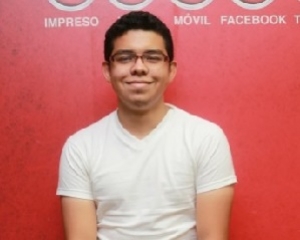 Eduardo Domínguez was a 2016 Professional Fellow from Latin America with ICFJ.

Eduardo, 24, is a Honduran journalist and the night editor of the digital area of the newspaper El Heraldo. He has worked in this medium since 2012. At 19, he started covering Metro, El Heraldo's section about news of the capital city of Honduras. In this area, Eduardo covered infrastructure, road projects, urbanism, tourism, access to water, and transparency policies of the mayor of Tegucigalpa. Then, in 2016, Eduardo began working for the web page with a new group of young journalists, with the goal to strengthen the digital section of the newspaper. Although Eduardo only has received training inside the newspaper, he also is a autodidact in digital tools and journalism 2.0 and 3.0.