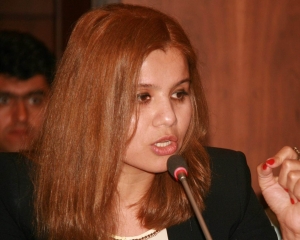 Humayro Muminova started her journalism career in 2007 as a reporter for Tajik Independent Radio Imruz, while a third year student at Tajik State National University. She started as a reporter in the Department of Social Issues before being appointed a Parliamentary Reporter to cover the work of MajlisiOli [Tajik Parliament]. Humayro left Radio Imruz in 2010 to work as a Political Analyst at Ozodagon, the leading Tajik Language newspaper. At Ozodagon, Humayro covered human rights issues, including the death penalty and torture. Humayro was awarded First Prize for Best Coverage of the 2013 Tajik Presidential Elections, by the Tajik office of the Institute for War and Peace Reporting (IWPR). In 2014, Humayro joined Asia Plus Media Group as a reporter focusing on political and human rights topics. She wrote for Asia Plus Group for a short time, during which she became target for the “Response Factory” created by the country’s secret services. Humayro has been recognized for her professionalism by leading local and international media supporting organizations such as: Media Alliance of Tajikistan [Award for Journalistic Bravery, 2012]; Tajikistan’s Bureau for Human Rights and Rule of Law [Tajikistan Best Reporter on Human Rights Issues for 2014]; The Institute for War and Peace Reporting [III Prize for Best Coverage of Radicalism & Extremism Issues in Tajik Media], etc.