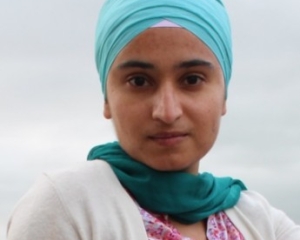 Kanwalroop Kaur Singh was a Bringing Home the World Fellow in 2017.

Kanwalroop Kaur Singh is a reporter for KALW Public Radio in San Francisco. Previously, she worked as a reporter and columnist for The Daily Californian. She also has been a teacher, community organizer, and oral historian. Kanwalroop’s stories have appeared in Black Girl Dangerous and As/Us, and has been performed at the Kearny Street Workshop.

Project: Explore how conditions created by U.S. multinationals and U.S. policies have spurred large numbers of farmers in India’s state of Punjab to move to California.

Fellowship Goal: Dedicated to what she calls “storytelling as justice,” Kanwalroop hopes the fellowship will give her a chance to tell stories that disrupt “oppressive” media narratives and demonstrate how journalists can be accountable to their communities.

Drought and debt, from Punjab to California: Unearthing the Green Revolution

A pattern of farmer suicides in Punjab: Unearthing the Green Revolution