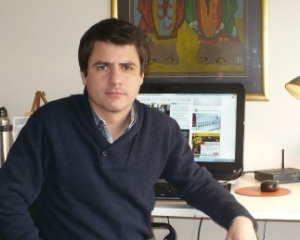 Rafael Bautista Otegui  is a 2018 Professional Fellow from Latin America with ICFJ.

Rafael was born in Buenos Aires, Argentina. He studied sociology at Universidad del Salvador and then did a master's degree in journalism at the Universidad de San Andrés. For more than 10 years, he has collaborated with articles in different national and international media on issues of environment, sustainability and community. Since 2011, he has been editor in chief for the “Gestión Sustentable,” a supplement in La Razón newspaper. He also heads the section “Calendario del Compromiso con la Comunidad” in Clarin´s Viva magazine. Clarin is the largest newspaper in Argentina. In 2017, he founded the Conexión Coral website, an independent digital media outlet specializing in climate change and sustainability. Before that, from 2009 to 2011, he worked as a legislative advisor in the Commission of Natural Resources in Argentina’s Chamber of Deputies. He has also ventured into literature and has published two books of poems (Días Hábiles, 2008, and Spam, 2012) and participated in different anthologies. Currently, in parallel to his tasks as a journalist, he coordinates creative writing workshops in Buenos Aires.