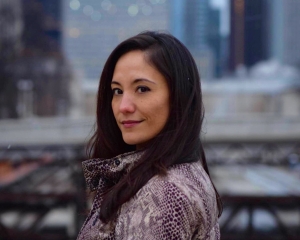 Sarah Macaraeg was a Bringing Home the World Fellow in 2016.

Sarah Macaraeg is an investigative journalist based in Chicago, where her coverage of human rights has focused primarily on police misconduct. A former data analyst trained as an oral historian and journalist, Macaraeg’s approach to storytelling combines deep dive data analysis and extensive interviews to bring to light the human cost of systemic failures in oversight, as well as community-envisioned solutions. Her investigations have been featured in Al Jazeera America, ColorLines, Fusion, The Guardian, VICE and Truthout. On a daily basis, she can be found poring over documents and spreadsheets, interviewing Chicagoans about their experiences with policing, attending court trials or obsessing over the right verb to use while writing. Her work has received fellowship support from Investigative Reporters and Editors (IRE) and the Institute for Journalism and Natural Resources, but Macaraeg is most proud of the personal notes she has received from readers affected by her work. In participating in ICFJ’s Bringing Home the World Fellowship as a Filipina-American journalist, she hopes to help U.S. audiences understand America’s role in the developing mining economy in the Philippines and cover human rights violations that have occurred alongside the sector’s expansion.

Project: Reporting from one of the frontlines of environmental justice worldwide, Macaraeg hopes to uncover the conflicts underlying the demand for gold in the global market from various regions of the Philippines, where access to the second largest reserves of gold in the world — valued at $1.4 trillion — are in contention between indigenous communities and multinational mining corporations.