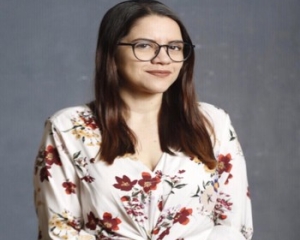 Thalie Ponce is a 2019 Professional Fellow from Latin America with ICFJ.

Thalie was born in Guayaquil, Ecuador, in 1990. She is a journalist and editor with nine years of experience, currently working as Digital Editor at Extra and Expreso newspapers.

She has worked at different local media outlets such as Vistazo magazine and El Comercio newspaper; and collaborates with independent platforms like Awake magazine and GK.
In 2011, she studied abroad for a semester in Australia while obtaining her bachelor’s degree in international journalism. In 2018, she won the interview category in the Jorge Mantilla Ortega Prize, the most important journalism award in Ecuador, for her interview with feminist writer and humorist Nerea Pérez de las Heras.

She is passionate about digital media, data and multiplatform journalism and is fascinated about how new technology is allowing journalists to explore stories with depth and new perspectives. As a feminist, she is interested in gender issues, the portrayal of women in media, and diversity.