I want to thank the ICFJ for this award. As you've heard tonight, this organization does great work supporting quality journalism around the world, and in this country. I’m proud to be included in your ranks. 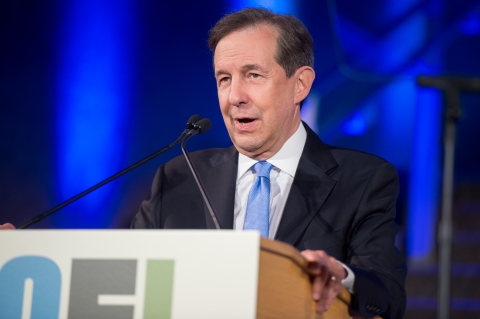 I'm especially delighted because my first boss (and maybe the best boss I ever had) was Tom Winship. And Tom was one of the founders of ICFJ. He was the editor of the Boston Globe—and he was straight out of central casting. Always sporting a bow tie and red suspenders—he hired me straight out of college. One of his hallmarks was how he encouraged young reporters.

But what sticks with me is something else. Tom had that remarkable ability great editors have—to see around the corner. I'll never forget—back in 1971—Tom convened a meeting to discuss what would be the big stories that year. With the Vietnam War raging, most of us talked about that—or the upcoming Presidential race, with Richard Nixon seeking re-election. Tom agreed those would be important. But he brought up something we all missed—the economy. As the year progressed—and we saw Nixon take the country off the gold standard—and impose wage and price controls—I wondered at Tom's remarkable feel for the news—even before it happened. And I asked myself—how did Tom know?

You've heard stories tonight of journalists around the world—facing challenges, even danger—as they report the news. And while I would never compare us to reporters in Syria or Pakistan—journalists in this country face our own headwinds these days. And that's what I want to talk about tonight. But let me be clear—whatever side you're on in the debate over journalism these days—you're not going to like some of what I have to say.

Let's start with a basic fact. President Trump is engaged in the most direct, sustained assault on a free press in our history. Since early in the campaign, he has done everything he can to delegitimize the media—attacking us institutionally and individually. And I think his purpose is clear: a concerted campaign to raise doubts that when we report critically about his Administration—that we can be trusted.

According to something called the Trump Twitter Archive (who knew that existed?) between January 10 and the end of October, Mr. Trump tweeted about "fake news" 141 times. One stands out. On February 17, the President tweeted this: "The fake news media (failing NY Times, NBC News, ABC, CBS, CNN) is not my enemy. It is the enemy of the American People!" And that was precisely his point. If we report negatively about something he’s doing, we are hurting the country.

Reince Priebus—then the White House Chief of Staff—was my guest on "Fox News Sunday" two days later. When I asked him about the President's tweet—he complained that, yes, we covered what Mr. Trump did—but, quote "as soon as it’s over, the next 20 hours is all about Russian spies." I answered: "You don't get to tell us what to do any more than Barack Obama. He whined about Fox News all the time. But he never said we were the enemy of the people."

But don't take it from me. Listen to Bill McRaven, a Navy SEAL for 37 years, who became the head of all US Special Forces—the man in charge of the missions that captured Saddam Hussein—and killed Osama bin Laden. It turns out McRaven graduated from the University of Texas—with a degree in journalism. He's now the Chancellor of the U-T system. And after the President's tweet he told students: "This sentiment may be the greatest threat to democracy in my lifetime."

Remember—this is a man who fought the Soviet Union—who fought Islamic terrorism. But when I asked him about his comments, he said this: "Those threats brought us together. Both the President and I swore an oath to the Constitution. And the First Amendment of that Constitution is freedom of the press. When the President says the media is the enemy of the people, to me that undermines the Constitution. So I do think it is a tremendous threat to our democracy."

It turns out McRaven may have understated the threat. A Politico poll a couple of weeks ago found that 46 percent of voters believe major news organizations make up stories about President Trump. A Newseum Institute poll in May found 23 percent think the First Amendment "goes too far." And 74 percent don't think "fake news" should be protected by the First Amendment.

That's the easy part of what I want to say tonight—at least for this audience. The next part isn't. But for those of us in this room—this “next part” may be more important. There's an old saying: "Even hypochondriacs sometimes get sick." And even if President Trump is trying to undermine the press for his own calculated reasons—when he talks about bias in the media—unfairness—I think he has a point.

Hear me out on this. On November 10, 2016—two days after the election—here was the banner headline across the front page of the New York Times: "Democrats, Students and Foreign Leaders Face the Reality of a Trump Presidency." This was the lead paragraph: "The American political establishment reeled on Wednesday as leaders in both parties began coming to grips with four years of President Donald J. Trump in the White House, a once unimaginable scenario that has now plunged the United States and its allies and adversaries into a period of deep uncertainty about the policies and impact of his Administration." “Reeled—coming to grips—unimaginable—plunged.” Could they have come up with any more buzzwords?

On August 2, this was the report from CNN's White House correspondent: "This White House has an unhealthy fixation on what I call the 3 M’s: the Mexicans, the Muslims, and the media. Their policies tend to be crafted around bashing one of these three groups."

And here was a tweet on August 18—not from the President—but from a White House reporter for the New York Times: "Would you keep working for a boss who consistently refuses to distance himself from virulent racists, anti-Semites, and white supremacists?"

Now, I'm sure some of you hear those comments and think they’re “spot on.” But ask yourself, honestly: do they belong on the front page of the paper? Or the lead of the Evening News?

Here's what I think is going on. I believe some of our colleagues—many of our colleagues—think this President has gone so far over the line bashing the media it has given them an excuse to cross the line themselves—to push back. As tempting as that may be, I think it's a big mistake.

We are not players in the game. We are umpires—or observers—trying to be objective witnesses to what is going on. That doesn't mean we’re stenographers. If the President—or anyone we're covering—says something untrue or does something questionable—we can and should report it.

But we shouldn't be drawn into becoming players on the field—trying to match the people we cover in invective. It's not our role. We're not as good at it as they are. And we’re giving up our special place in our democracy. There's enough to report about this President—that we don't need to offer opinions or put our thumb on the scale. Be as straight and accurate and dispassionate as we first learned to be as reporters.
Just the way Tom Winship taught me to do the job so many years ago.

Thank you for letting me get some things off my chest. Thank you again for this evening—and this award. And thank you for backing solid journalism around the world.