Good evening everyone. It is a great honor for me to be among you today, after winning the Knight International Journalism Award. 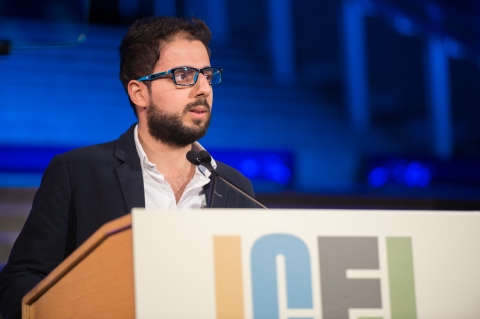 I was studying law at the university. But after the revolution began, I started to cover events in my city of Aleppo. Freedom of press in Syria ranks among the worst in the world. I wanted to shed light on the truth. Very little was reaching the world from mainstream media. I wanted to tell the world what was going on.

At first, my tools were basic, and I lacked professionalism. But over time, we citizen journalists gained experience and the quality of our work improved. Keep in mind that foreign journalists left Syria at the end of 2013 because of kidnappings and murders. Citizen journalists became reliable sources of information for international news organizations. Our pictures and videos started to reach the world from the Syrian war, the worst war, I believe, since World War II.

There were many dangers from the Syrian regime. I spent a month in solitary in a Syrian prison, where I was tortured. Syrian journalists also faced new dangers from ISIS and terrorist organizations. I spent six months in an ISIS prison—including 45 days in solitary. No one wanted journalists in their areas of control.

Every day was a struggle to survive. I got injured while covering the fighting. Sadly, I lost my mother in bombings by the Syrian regime. I lost other family and friends in the conflict. I do not deny that I felt despair. But I never gave up.

All the pictures and videos I have taken are still in my mind. Some may say that the coverage did not have an impact, because it did not stop the suffering of the Syrian people. But, believe me, without those pictures, the Syrian regime would have wiped out cities with its arms and chemical weapons without anyone finding out.

My country has sunk into a swamp of war. It is drowning. More than 500,000 people have been killed. Millions have been forced to leave their homes. It hurts me to see what has happened to my country. Syrians have lost everything. Even their dreams no longer exist.

I am not brave because I covered the war. Anyone could have done what I did. But I think the courage was to choose not to leave Aleppo, despite the harsh conditions. I did not run away or leave voluntarily. Together with thousands of other citizens, I was forced to leave when the Syrian regime took control of the city in late 2016.

I have waited for a happy ending like the one I have seen in Hollywood films. I want an end to all the misery that the Syrian people have endured, an end to injustice, an end to the daily killings. Unfortunately, real life is quite different from the movies.

Despite everything, I have gained a great deal by going through this experience, but mainly I have fallen in love — in love with being a journalist and with conveying the truth.

Thank you very much.