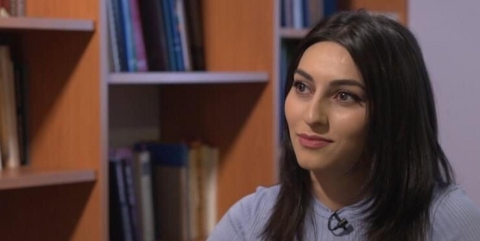 Investigative journalist Ani Mejlumyan recalls the onset of COVID-19. The day after Armenia declared a state of emergency in mid-March, the government censored the media to prevent them from reporting on the pandemic. Restaurants, meanwhile, remained open for ten more days.

A senior correspondent at Eurasianet, Mejlumyan writes deep-dive investigative and analytical pieces about Armenia, often for an international audience. As the pandemic spread around the world in March, she wrote about the harassment and threats journalists faced from police for covering the health crisis as it was emerging in her country.

“What do we do as the media if we don’t cover the main events?” said Mejlumyan. She believes the government’s media ban wasn’t instituted to protect the safety of the Armenian people, but instead was an effort to control messaging around the virus and keep people from panicking.

Armenians condemned the media ban, and thanks to international pressure, the government eventually lifted it in mid-April. However, because information had been withheld from journalists, Armenians failed to understand the severity of the pandemic until it began affecting them personally.

“For me, this was the biggest issue,” said Mejlumyan. “People weren’t seeing the real picture of COVID-19. People were questioning if this even existed until their family members or neighbors got sick.”

With almost 46,000 confirmed cases and over 900 confirmed deaths in Armenia today, one can no longer credibly deny COVID-19’s existence. “By not letting journalists cover the pandemic, the public lost access to vital information,” she said. “People needed to be scared. They needed to panic a little bit, so they could realize that every decision they make can have consequences.”

The Armenian government has waffled on its approach to containing COVID-19 throughout the crisis, said Mejlumyan. For example, it changed its stance on mask-wearing several times. Although today masks are required in public spaces, the government previously advised only sick people to wear masks in public. Today, videos circulating online show police beating people for failing to wear masks in public.

Mejlumyan faults Armenian Prime Minister Nikol Pashinyan. “At the beginning of the pandemic, the prime minister was not taking it seriously. He was saying, ‘What can the pandemic do to us?’” recalled Mejlumyan. In early June, Pashinyan tested positive for COVID-19.

When reporting on the pandemic, Mejlumyan recommended, “First look at data. Ask for governments to keep comprehensive data, then talk to doctors and patients. Try to get the most unexpected stories.”

However, gaining access to data has been an issue in Armenia as the government has repeatedly ignored requests for numbers from journalists, noted Mejlumyan. To fill this void, she and other journalists watch government press briefings to stay on top of developments.

They also visit government officials’ Facebook pages to track down important numbers, like how many people are experiencing severe conditions. “Whatever is missing, I'm always in touch with my colleagues and we share information amongst each other,” she said.

Government efforts to secretly pass legislation under the guise of emergency issues are also a trend Mejlumyan is tracking. “Most of them don't even have any elements of emergency,” she said. One example is Armenia’s proposed legislation to weaken the country’s freedom of information law, which Mejlumyan covered in a report in April.

Eurasianet readers can use the site to examine how the Armenian government is handling the pandemic, and Mejlumyan believes it is a useful platform for outsiders to monitor if Armenia’s leaders are sliding toward authoritarian measures that could jeopardize the country’s democracy. “We are not pro- or anti-government, so we can examine the issues freely,” she said.

When Armenian Health Minister Arsen Torosyan announced in May that newly infected patients would be treated at home, Mejlumyan investigated the government’s position and found that hospitals in Armenia were reaching capacity, and patients were dying in hospitals due to a lack of beds.

“The media has to make enough noise so the government can do something about it,” said Mejlumyan. “Why are we not expanding the capacity? Why aren’t we acting fast enough?”

Mejlumyan advised fellow reporters to collaborate and always fact-check when they report on the health crisis and today’s other pressing issues. “Even if you think you know something, always do your job and verify it by collaborating with legitimate media in your country. Anything you write can harm you, ruin your reputation, and damage your media outlet. “It's very important to put the time into fact-checking,” said Mejlumyan. Without fact-checking, journalists may perpetuate misinformation by quoting government officials who do so themselves, she continued, adding that simply applying an “according to” isn’t sufficient, when credible figures are not the source of the information.

The ICFJ Global Health Crisis Reporting Forum is one way Mejlumyan has kept informed about COVID-19, and engaged with fellow reporters covering the health crisis. “Since ICFJ created the crisis group for the pandemic I have been following what experts say, what developments there are, and the overall discussion between journalists around the world,” she said.

Mejlumyan also recommended resources from the Organized Crime and Corruption Reporting Project (OCCRP), an investigative reporting platform that focuses on exposing organized crime and corruption. “If it's an emergency, they have an entire network of journalists who will help you fact-check and dig into databases,” she said.

Journalism is not a one-person job, and yet many local news outlets in Armenia don’t have editors or fact-checkers, Mejlumyan noted. Those that do don’t pay them well or at all. Through effective collaboration and fact-checking, journalists can better their reporting and help improve media literacy among the public, she believes.

Despite the news industry’s hardships today, Mejlumyan told IJNet, “I would be so unhappy if I had to leave journalism.”

Tedi Doychinova is a Program Officer at ICFJ.

The Global Health Crisis Reporting Forum from ICFJ and IJNet is a place for reporters around the world to connect on how COVID-19 is impacting both their country and their work. This is the second in a series of features through which we take a deeper look at the individual stories and work of journalists in the Forum.

This article is part of our online coverage of reporting on COVID-19. To see more resources, click here.