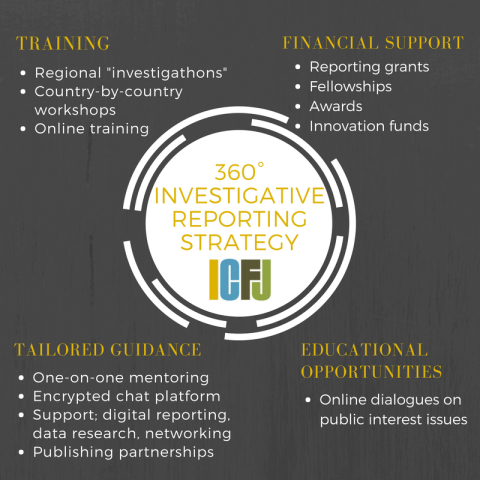 The award-winning series – a three-month investigation by Maria Cidón, Priscila Hernández, and Prometeo Lucero – was part of ICFJ’s Investigative Reporting Initiative for the Americas (IRIA). The report was picked up by El Nuevo Herald in the United States, received a second place award in the multimedia category in the 2017 “Gilberto Rincón Gallardo” Discrimination Awards, and was a pioneering piece on an issue that previously hadn’t received significant exposure in the Latin American media.

The Northern Triangle includes Honduras, El Salvador, and Guatemala. It is considered one of the most violent regions in the world, where organized crime linked to drug trafficking operates across borders. The seven-part investigation reported on impunity for those who murder transgender women, and detailed the circumstances that lead transgender women to flee the Northern Triangle to Mexico and the United States, using the testimonials of eight people.

Cidón and Hernández had initially collaborated on an investigation about accidents that result in injury or disfigurement for Central American migrants who travel, through Mexico to the United States, on the train route known as “La Bestia.” The duo brought Lucero into the fold because of his strong audiovisual skills and extensive reporting background.

The trio’s collaboration encapsulates ICFJ’s 360-degree approach to building the capacity of investigative journalists in Latin America. Through a combination of training, financial support, educational opportunities, and tailored guidance, ICFJ’s IRIA has been consolidating a network of regional journalists incubated through its Colombian-based partner Connectas and its established network, the Connectas Hub.

Connectas Hub has bridged the gaps between countries in Latin America and fostered a culture of collaboration. In a survey of journalists who have participated in IRIA since its inception four years ago, almost 80 percent of respondents maintain contact with Connectas Hub members. Of that 80 percent, three-quarters of the established connections are with journalists from a different country.

Some other recently produced collaborative investigations include:

During the last four years, IRIA has produced more than 100 in-depth stories exposing nearly US$3.8 billion of mismanagement of public funds in Latin America.