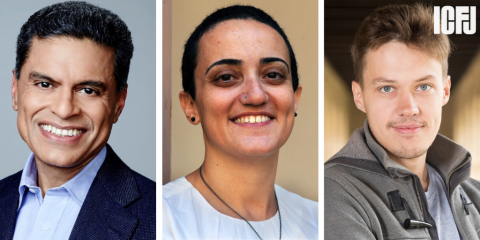 The International Center for Journalists (ICFJ) will award top honors this year to CNN host Fareed Zakaria and two intrepid founders of investigative news sites in Egypt and Russia, countries with harsh controls on the press.

Zakaria, whose thoughtful insights and expert analysis have helped Americans make sense of complex global issues for nearly three decades, will receive the ICFJ Founders Award for Excellence in Journalism. The host of CNN’s “Fareed Zakaria GPS” and a columnist for The Washington Post, he has brought his clear-eyed perspectives to the biggest, most important stories of the day — from the Brexit debate to Russian interference in U.S. elections to the coronavirus pandemic that is rocking the world.

“Fareed is one of the smartest analysts on foreign policy,” ICFJ President Joyce Barnathan said. “He has a deep understanding of global trends and an unmatched ability to explain how they impact us.”

Attalah is co-founder and editor-in-chief of Mada Masr, an online news organization that unflinchingly produces investigative reports exposing corruption and misconduct in the midst of Egypt’s harsh crackdown on independent voices. The website, which the government constantly seeks to block, has shed light on Egypt’s COVID-19 crisis, from its spread among medical staff to its economic toll on the most vulnerable communities. “Lina's bravery and grit in the face of tremendous obstacles set a powerful example for journalists around the world,” said Politico editor Carrie Budoff Brown, a judge for this year’s award and an ICFJ board member.

In 2013, he won the ICFJ Knight International Journalism Award for his intrepid investigative reporting amid Vladimir Putin’s crackdowns on freedom of expression. Knight Foundation President and CEO Alberto Ibargüen said: “Roman Anin is one of the most courageous journalists in the world, committed to tough investigative reporting in a country where sources of independent news are increasingly rare.”

“We are proud to recognize Lina and Roman, two digital news founders who dare to bring us the truth despite the dangers,” Barnathan said. “They take on the tough stories in countries where distortions and disinformation are common.”

The awards will be presented on October 5, 2020, during a virtual tribute to journalism excellence, hosted by CNN lead political anchor Wolf Blitzer. Because of ongoing health threats from COVID-19, an in-person gathering is not possible this year. ICFJ’s Tribute to Journalists 2020 event will take ICFJ’s Annual Awards Dinner — Washington, D.C.’s top international journalism event — from one ballroom to the world.