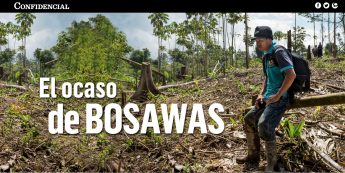 Journalists associated with the CONNECTAS network, a platform supported by the International Center for Journalists (ICFJ), produced four of the 13 finalist projects in the Inter American Press Association’s Excellence in Journalism Award of 2015. The four finalist teams are part of ICFJ and CONNECTAS’ Investigative Reporting Initiative in the Americas, a project that aims to spur investigative journalism across the region.

The 13 finalists were chosen from 1,019 applicants from across the Americas.

“To be chosen as a finalist in a competition with such high quality candidates constitutes an enormous stimulus. The projects which we recognize today are a reflection of the best journalism in the Americas,” said Noble Herrera, in the statement by IAPA that announced the nominees.

Two of the projects done by journalists in the network supported by ICFJ are in the category of Internet news coverage. One of these is México en poder de las mineras (“Mexico in the hands of the mining companies”), an investigative journalism project carried out by the El Universal data team led by Lilia Saúl, which also included Saúl Hernández, Carlos Gutiérrez Brach, and with the multimedia support of David Torres and Fermín García.

In the category of environmental journalism, El ocaso de Bosawas (“Decline of the Bosawas”) an investigation about environmental destruction by Carlos Salinas Maldonado of the Revista Confidencial of Nicaragua, was also a finalist. He collaborated with Octavia Enríquez and received multimedia support from Carlos Herrera, Xavier Mántica, Camilo de Castro, and Jose Luis Somarriba. ICFJ Knight Fellow Gustavo Faleiros collaborated as a consultant.

The fourth investigation, El Nuevo Éxodo Latino (“The New Latino Exodus”), was a finalist in the category of inter American relations. The project is a transnational and collaborative work led by El Mercurio of Antofagasta, Chile, and CONNECTAS, in cooperation with Agenda Propia and VICE of Colombia and Peru. The journalists that participated in this investigation were Cristián Asencio and Tamara Miranda of Chile, Dánea Rivadeneyra of Peru, and Edilma Prada, Juan Camilo Maldonado and Carlos Huertas of Colombia. This work had the multimedia support of Rodrigo Selles Ferres, Edgard Cross Buchancan, David Bustos, Brice Le Borgne and Miguel Coaquira.

“The quantity and quality of investigative reporting is certainly increasing in the region, and we are glad to see how more than 15 journalists from eight countries of the emerging CONNECTAS Network are being recognized for their work,” said Luis Botello, Senior Director of Special Projects at ICFJ.

The recipients of the award, as well as the honorable mentions, will be announced during the IAPA’s 71st General Assembly, to be held in Charleston, South Carolina, on October 2-6.