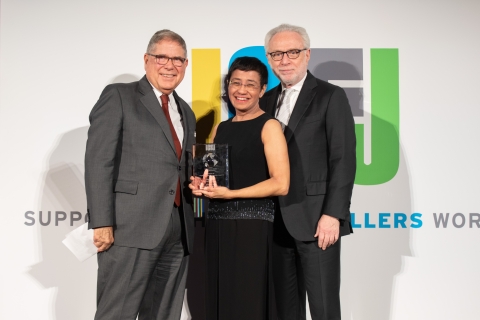 Maria Ressa, whose trailblazing news site is under constant threat for speaking truth to power in her native Philippines, says social media giants that have been used to spread lies have a responsibility to protect the public sphere.

In Washington to accept the prestigious Knight International Journalism Award, Ressa criticized both the Philippines government and global tech companies for harming democracy and threatening news organizations such as Rappler, which she founded seven years ago after a long career at CNN.

Rappler, a popular online news site, has been at the forefront of both investigative journalism and media innovation. Its coverage of disinformation campaigns and tens of thousands of extrajudicial killings in the government’s war on drugs have made Rappler a target of official attacks.

Ressa said that Philippines President Rodrigo Duterte was using the same playbook as Donald Trump in his attacks on the press by banning reporters and labeling critical stories fake news. “Our problems are fast becoming your problems. Boundaries around the world have collapsed,” she said.

“We battle impunity from the Philippine government and from Facebook. Both seed violence, fear, and lies that poison our democracy,” she said. “Those lies on social media form the basis of the government’s many legal cases against us.”

Ressa issued a challenge to social media giants, noting that 90 percent of new digital ads went to Google and Facebook in 2017, with more expected in 2018. “Now the social media tech giants are the world’s largest distributor of news. Yet, they shy away from the responsibilities that come with that – and that has global impact: allowing authoritarian-style leaders to use their platforms to cripple trust, remold truth, and consolidate their power.”

She urged the tech companies to “consider making the same tough business decisions our little company made to protect the public sphere and to ensure democracy survives.”

She also urged journalists to stay the course. “Without hope, we have no energy to move forward. We have to take the long view, work together and know we are not alone. This is a global battle.”