Highlights from the ICFJ Tribute to Journalists 2022

At ICFJ’s 2022 Tribute to Journalists, we saluted intrepid colleagues who produce outstanding news coverage with important impacts, often reporting from places where journalists risk their lives to do their work.

Our honorees and supporters gathered at our gala in Washington, DC, after two years of virtual events. Many more from around the world watched our program online. We are grateful to our sponsors who made the night possible. Among the evening’s highlights: 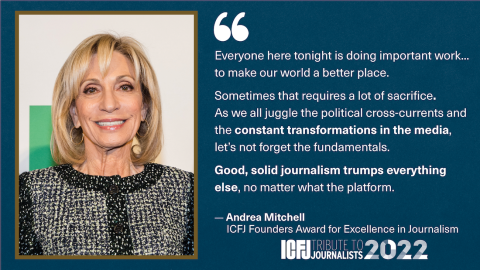 Andrea Mitchell, a pioneering correspondent for NBC News known for relentless coverage of U.S. foreign policy, praised ICFJ for “mentoring and supporting an enormous network of global journalists.” She said: “We need great journalism now more than at any time I can recall...never before has our own system been challenged as it has been challenged in the last year or year and a half. And that is mirrored by authoritarian governments, movements overseas.” Mitchell received the ICFJ Founders Award for Excellence in Journalism for a lifetime commitment to the highest professional standards. Read more and watch her tribute video.

Christo Grozev, who heads the groundbreaking journalism group Bellingcat, uses crowd-sourcing and other innovative methods that have linked Russia to political poisonings and disinformation campaigns. He credited Bellingcat's success to “an engaged audience” of citizen journalists and social media followers who work with the outlet's professional journalists: “Our real innovation was in inviting our audience to be part of our investigations.” Grozev and Bellingcat are the recipients of the 2022 ICFJ Innovation in International Reporting Award. Read more and watch their tribute video. 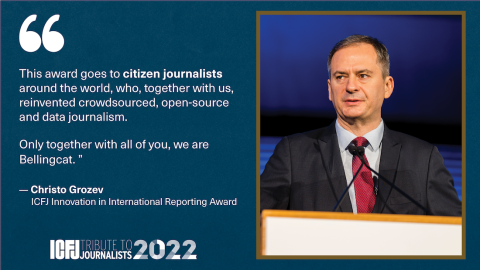 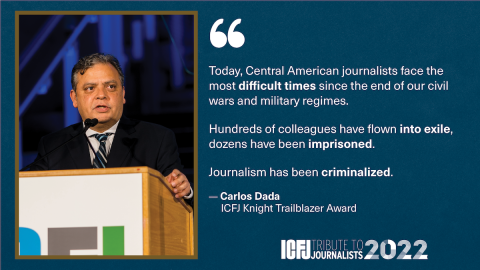 Carlos Dada, co-founder and director of the trailblazing El Faro in El Salvador, said: “Central American journalists face the most difficult times since the end of our civil wars and military regimes. Hundreds of colleagues have flown into exile, dozens have been imprisoned. Journalism has been criminalized.” Dada received the ICFJ Knight Trailblazer Award in recognition of his hard-hitting investigative reporting and visionary leadership. Read more and watch his video.

A trio of Ukrainian journalists who produced heart-wrenching coverage of Russia’s attack on Mariupol were honored with the ICFJ Knight International Journalism Award. Working for the Associated Press, the journalists – Mstyslav Chernov, Evgeniy Maloletka and Vasilisa Stepanenko – provided striking visual evidence of the human suffering caused by the war. Maloletka, a prize-winning photographer, said: “During our 20 days in Mariupol, we witnessed war crimes, air strikes, and atrocities against civilians committed by the Russian forces. It was important for us to show to the country and to the world the suffering, fear and pain of the Ukrainians.”  Read more and watch their tribute video. 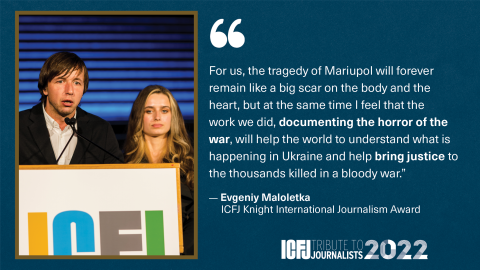 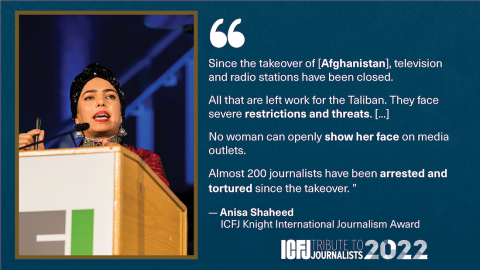 Our other Knight Award winner, Anisa Shaheed, a veteran television reporter known for fearless coverage in Afghanistan, called on world leaders to “take human rights issues, including for women, into consideration.” She said more than 200 journalists have been arrested and tortured since the Taliban seized power in 2021. And she dedicated her award to “all of the fallen journalists who gave their lives for Afghanistan.” Read more and watch her tribute video.

Jonathan Capehart, associate editor for The Washington Post and MSNBC host, graciously stepped in to serve as our master of ceremonies for the night (CNN anchor Wolf Blitzer was covering the midterm election results – we missed you, Wolf!). Jonathan was a superb emcee, and we are immensely grateful for his help.

The evening featured drawings by New Yorker cartoonist Liza Donnelly and an auction of stunning photos from National Geographic. The magazine donated 20 photos depicting people and creatures across a changing world, where technology propels us forward while global warming threatens traditions of the past.

You also can see photos of the evening here.

We are deeply grateful to all our sponsors and supporters, to everyone who made a donation or purchased a photo. Your contributions support ICFJ programs that empower our global network of journalists who face increasing perils around the world. And it is not too late to donate! Our work is more needed than ever, so please consider making a contribution today.

Thank you for joining us for this special tribute to these amazing journalists.